Nice interview from the Nightly News with Bill Gates, reflecting on where he’s going, how Microsoft was started, and how innovation began.  This takes about 25 minutes to watch in total as he talks about future plans and The Foundation.

Among the items discussed include speech recognition, Tablet PCs, and much 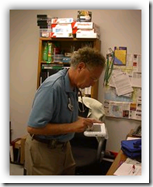 more.  He talks about taking chances and about the ideas that have also failed.  He mentions that Pharma, Big Banking as being 2 big industries that have capitalized on the use of technology.  He discusses his daughter’s use of a Tablet PC at school

and the balance of technology of the youth today with technology, being careful about being overdone.  Also interesting is how he discussed a few of his odd habits, like putting a blanket over his head years ago when flying to get some quiet.

He also talked about the online courses he takes, including those from MIT,

as being one of the most famous Harvard drop outs.  Funny, he talks about playing bridge, prefers to be there in person, but also takes advantage of playing over the web.  He still gets a newspaper, but rarely finds the time as he’s online for most of his news and talks about the move to being online.  No digital jigsaw puzzles yet!  BD