Implantables helping with pain.  This one focuses on the spinal cord and the therapy and surgery was able to get one man up and around out of the wheelchair.  It is fairly expensive and thus insurance may or may not cover any or a portion.  He also hopes to completely dump his morphine intake which is already down to 30 mg…he uses an implantable pulse generator, which is powered by a battery implanted under his skin and it has a remote control. 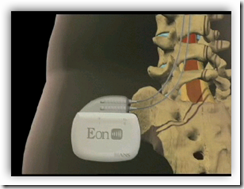 This is great news for those in chronic pain.  More and more devices are coming of age whereby the use of medications could eventually be on a down swing.  One thing to keep in mind though is that a pill is a visitor and a medical devices lives with you, so be sure.  In the case of this device there was a trial unit that was available before surgery, in other words it was not implanted but more or less a test unit to see if it would work before going through surgery.  For those with potential back surgery pressing, this could serve to either be a substitute or an aid…BD

He ruptured two discs 13 years ago lifting boxes while doing volunteer work for a homeless program. "A couple of months later, I was bedridden and rushed to the hospital in pain," said the priest, a missionary serving colonias on the far East Side. What followed was a litany of more ruptured discs (three in his neck), surgeries on his back, knees,  elbows and left hand; a pharmacy's worth of medications for everything from pain to depression; and a loss of feeling in his legs that often has restricted the 35-year-old priest to a wheelchair.

It's known as spinal cord stimulation therapy and it essentially fools the body into thinking that it is not feeling any pain.

"This actually works by not letting your brain realize the pain you're in," Sida said. "The electricity counteracts the neurons coming up into your brain, so you don't feel that pain."