Is the collection process at a physician’s office getting this bad?  The patient did return and pay for the visit, but according to the article she was locked in a room as she syated that she needed to go cash a check to pay for the bill, which was around $600.00 more than anticipated. Doctors and staff were arrested over the incident and legal proceedings are following.  The video showed a sign that showed “no checks”.  I’m sure there will be more on this story as information unfolds, and the patient did not have insurance coverage.  BD 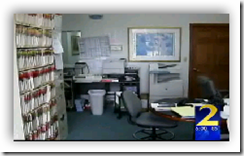 DULUTH, Ga. -- A doctor and two staffers at a Gwinnett medical office held a patient prisoner because they feared the woman couldn't pay her bill, according to police. Dr. John Drew Laurusonis, Leslie Ann York and Acquah Alexander were charged Tuesday with felony false imprisonment.

Bales' attorney said clinic staffers told her initially that the visit would cost $98; Bale does not have insurance and planned to pay cash. After seeing the doctor and undergoing a series of tests, the bill came to $755. When Bales said she didn't have the money, she was locked in an office, according to the charges against Laurusonis, York and Alexander.