This hospital in Pennsylvania is converting all operating rooms to handle telemedicine.  One benefit stated is the opportunity to conduct surgery via telemedicine on prisoners as it is very difficult to transport them to a hospital and then there’s the obvious security risks as well.  One physician remarks that at some point in time a physician might even be able to operate from the comfort of home with the rapid current advancements being made with telemedicine and the use of robotics.   BD 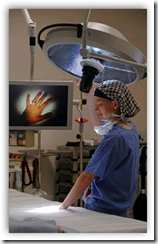 Some area hospitals are taking advantage of new technology to expand their knowledge and improve patient care. Lancaster General Hospital is converting all of its 42 operating rooms at the downtown Lancaster facility to include an array of digital equipment that will make it easier for doctors and nurses to do their jobs during surgeries, said Stacey Youcis, vice president of operations for the hospital.  The cost is not cheap, Youcis said. "It ranges from about $90,000 to $200,000 per room, depending on how extensive the room is."

The rooms include cameras placed in the center of the main surgical light, as well as other areas of the room. A 42-inch plasma screen mounted on the wall provides everyone in the room with the surgeon's view, including nurses, anesthetists and other medical personnel, Youcis said.

Business News for the Central Pennsylvania region including the Harrisburg, York and Lancaster areas - CentralPennBusiness.com