With the electronic medical era of devices, here’s the next one on the list.  A home migraine zapper, still in clinical trials.  Will headache sufferers someday all be walking around with their do it your self zapper?  The study is being conducted in Canada.  BD 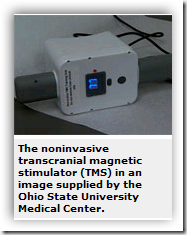 A hand-held electronic device that emits electromagnetic waves relieves migraine pain before it even begins, a new study says. The study, conducted at The Ohio State University Medical Center, found that the device can eliminate pain when used as a migraine is beginning to develop. Out of 164 patients who received treatment, 39 per cent reported being pain free two hours later, compared to 22 per cent of subjects who received placebo treatment.

The findings are being presented Friday at the annual American Headache Society meeting in Boston. In the study, no adverse side effects were reported by patients who were treated with the TMS device.

Previous research was conducted on a similar machine that was large and bulky. This new, smaller device will be usable by patients at home or on the go.