Where the money isn't – The Family Practice

From Maryland, the physician states 15 years ago he was a wealthy doctor and today he is struggling and now thinking about quitting.  Hopefully Congress will try once more to abate the pay cuts, or there may be many more who quit.  Most of the MDs I know practice as it is their passion, not just a job.  Another cut of 5% is on the table for January.  For those physicians see a high number of Medicare patients this is critical not only to their income, but also patient access.  Where will the Medicare folks go once the number gets smaller?

This physician states the rates are among the worst and that is also felt in California where there could be a rally for who has some of the worst contracts between the 2 states, as neither is up at the top of the ladder. What is happening is the demise of the small family practice as we have known for years.  Many have taken on salaried position at Kaiser, or Government entities. 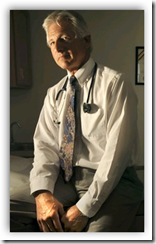 With many of the pay for performance incentives, compensation is not always on quality but more so on quantity.  I was in sales for many years and pay for performance has been around for years and that’s what it was in sales too, the numbers.  We continue to read about the billion dollar profits here in California as well and the fact that insurance is becoming unaffordable for many, so that brings one more question to mind, how do you pass a law to require insurance that people can’t afford…big question and are profits here going to fund start up offices in China?  BD

Dr. Ronald Sroka has been a family care physician in the same Crofton location for 30 years, just six miles from where he grew up. He's the president-elect of the Maryland State Medical Society, he was voted favorite physician last year in the local Suburban Scene publication, and he counts his high school principal among his many longtime patients. Simply put, Sroka loves what he does. But this is the last year he may be able to afford to do it.

Where the money isn't -- baltimoresun.com