This is great news with the use of the checklist, but the only thing I though was somewhat odd was it being on paper and why not on a whiteboard to where it could be visible by the entire staff?  A check list though is better than no check list by all means.  If used on a whiteboard let’s say with a Tablet PC and medical records, the information would immediately be send to a chart as well.  Tablet PCs are already

engaged in many surgery rooms for other purposes already.  Earlier this year at the HIMMS convention I spoke with a couple of hospitals that have tablets mounted in place in the operating rooms. BD 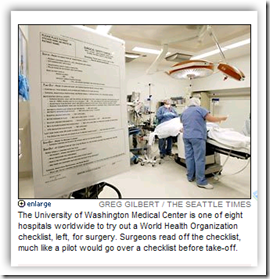 Organization unveiled today. The UW's participation was spearheaded by Dr. E. Patchen "Patch" Dellinger, vice chairman of its surgery department. The list includes simple safety checks before and after surgery that the WHO says could cut the rate of surgical complications in half, such as verifying the surgical site, the patient's known allergies and making sure nothing was left inside the patient's body.