The Pill Bottle That Talks To Your Cell Phone, Creates Data Reports and More…

, well the devices are either on their way shortly or are here.   I’ll give you an equation here as to how this works:

Notice there’s a big blank at the end, that represents someone or somebody else who could be reviewing your data.  Is it a relative, a wellness group, a wellness program from an insurance company??  It could be any and all the above, so the best thing one can do is to first of all have the information go to your own PHR first! This way you are in control.  This is new technology and there are not a lot of rules and regulations governing a lot of this yet as it is too new, so it can be open ball game, so be careful.  Get your information into your own PHR first so you do not lose control and ultimately have data used against you for medical services.  What happens if you get all the notifications and don’t take your medications?  In this case the pharmacy will know, as they are tuned in to know when your refill is due. 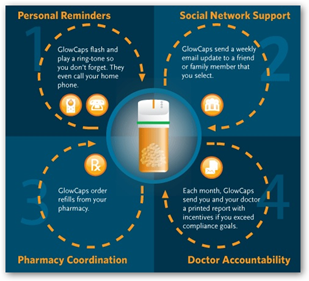 Now that the pharmacy is included in the loop, your information can be sold.  Yes you are for sale.

Here are 2 companies that sell prescription data and profiling information.

The video below is the old version of the product but it does a good job showing how it works and the new version talks right to the cell phone.  So just keep in mind along with all those reminders, there’s an audit trail.

The technology is great if used properly to help us, but we don’t want data and audit trails used to deny service if a pill was missed and risk management, insurance companies as we have seen in the past have denied claims for things like yeast infections, a case of acne not being reported so remember data is very powerful and if given and accessible to those who want it, it could in fact be used against you when you need it the most as they will create a series of reports to show where “you” the patient defaulted.  Nothing personal, it’s all about risk management and showing a profit for the shareholders. Target Stores works with an insurance carrier, Red Brick who uses technology from Ingenix, and has options for the employers to have the employee’s activity level sent to an iPhone or other wireless device and this information gets delivered to “wellness coaches” who see the data and work with you, but are we sure this is the only source who sees the data and who and where are they? The trade off here are incentives and possible discounts on their share of their employee health insurance.

I mention all of this to bring about an awareness so you may question and learn about where your data is going and who has it and how it will be used.  The vitality site shows that the product will work with PHRs and I tried the links and it appears as of now it would be adding a document to your file.  There’s a pilot program called “Stick To It” whereby you can get a device for free if you adhere to your plan.  See the note on the site:  Your Insurance Company is sponsoring you for participation.  You are not stuck in the pilot program and can cancel at any time. Again, just like with any data reporting device, make sure you read and know the rules up front, as again so much of this is new territory and we don’t have algorithmic laws to spell these things out yet in Congress, so there’s a lot of anything goes out there as this data has not been fully regulated or governing laws put in place, there are some, but lots of holes.  BD 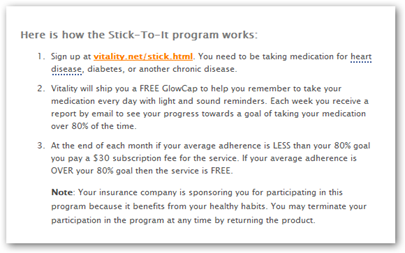 There is also a section on how to promote the service to members if you are a managed care organization.   If you have read this far, go back to the top and read that equation one more time so you as a patient are informed as well.  Once more it’s all in those algorithms.  BD

NEW YORK — "Hi! This is your aspirin bottle calling. I haven't seen you in a while. Why don't you come see me soon? I'm good for the heart, you know."

That's the spirit, if not the wording, of the calls that will come from new pill bottle caps that connect to AT&T Inc.'s wireless network.

A Cambridge, Mass.-based startup called Vitality Inc. was set to announce the pill-bottle system Thursday, saying it helps solve one of the biggest problems in medicine: that people don't consistently take the drugs they're prescribed.

The Associated Press: Next: the pill bottle cap with a cell phone