Most of the United Way center’s funding came from the Melinda and Bill Gates Foundation initially and the name of Bill Gates’ deceased mother will carry on.

and web conferencing, and this will stand to benefit all as employees and staffers will be able to communicate in the 21st century. Those in need will have a new way of communicating and I am guessing too that other corporate sponsors could also take advantage here with communicating with areas of contributions, etc.

The Melinda and Bill Gates foundation until recently has worked quietly, a lot in the 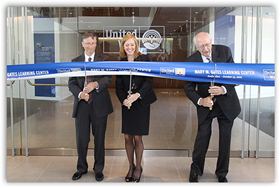 background and it’s nice to begin to see the results of their 10 year efforts now appearing in the news.   We like that a lot.  If you happened to miss the TED presentation from Melinda Gates, the link below will take you there and she’s got a lot of good ideas and methodologies in use right now too.

Also well worth watching is the 60 Minutes report from a couple weeks ago too in which some real scenes and issues they are working on are talked about and seen on video.  BD

Gates said at Wednesday's event at United Way headquarters that his mother got him thinking about volunteerism at a young age in conversations over the dinner table.

Most of the center's initial funding came from a $10 million donation from the Bill and Melinda Gates Foundation. Bill's mother, Mary Gates, was a longtime United Way supporter and board member who died in 1994.