Every week I read in the news “we need more innovation” and for goodness sakes in Health IT we have innovation running out our ears!  Everyone is so busy building the better mouse trap that we have forgotten how to collaborate and work together.  We are seeing some signs of this and it usually comes in the form of a merger or acquisition as the economy is dictating much of that to figure out how to maintain current profit levels or how to gain more.

We do a pretty poor job on collaborating and yes there’s a certain amount of competition needed, but in Health IT business intelligence with added transaction fees for each algorithmic process that is added, it is eating us up alive.  In doing this blog I see new press releases every day and what is occurring is all are moving to where the money is, the payables side.  Healthcare reform is working to try and eliminate some of this but in working with old paradigms we keep running into a dead end and the costs for this just keep on rising.

There are algorithms written for “accurate” results and those written for “desired” results and the 2 are not always the same and thus when purchasing software or web based services it’s easy to get confused as you will usually get what you bought but at what cost?

We have just about drained one side being the hospitals and doctors that provide these services, but the payer side with additional complicated algorithms keeps growing and growing and for the most part this is all proprietary systems generated to make a profit.  I don’t deny anyone the opportunity to make money but the scale is lopsided to the extreme to where it ties one hand behind the clinical side today.  Pharma and insurance companies are not going to be able to sustain the levels of

profits seen in the past, it’s a given and to keep pulling that cord and having drugs covered with extensive patents and costs won’t cut it, same with insurance and those folks are the experts on how to adjust algorithms for profit, they live by them. 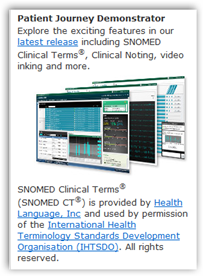 source free software from Microsoft with the Common User Interface, been out there since 2008 for free, open for any company to work with and I have suggested it many times, did anybody bite, no. Doctors would have loved this to be able to go to any hospital and have common and either similar or the same screens to find the patient information they needed.  Ask any MD and I don’t think you will find one that wants to learn numerous systems.  Did it take off, no as we were all to busy with innovation without collaboration and the doctors and clinicians will just have to deal with what was created.

Take a look and see what it looked like in 2008, pretty snazzy and high functioning too.  I did a video walk through in the video and has SNOMED too. 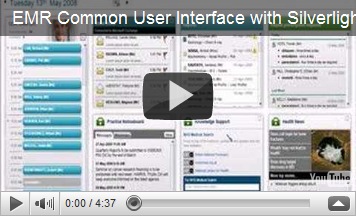 It is a sad state of affairs that we are to the point of massive complication we live with today and nobody likes it but we spend all our time innovating and not enough collaborating.

There’s a lot of other open source stuff over there too at Code Plex.

To make my point even further, here’s a doctor/developer in New Zealand who is not even writing in any Microsoft language, but yet he was pretty well able to emulate the screens, so no barriers there.

There are more images at the link to see more.  Also when I went last year to the World Tourism Congress I talked quite a while with a professor from Germany, Prof. Dr. Horst Kunhardt, Department of Business Informatics, University of App. Sc. Deggendorf ,  who wrote a medical records system what was being used by several hospitals over there.  We talked a lot about screens and code but you can read a bit more here and see some of his screens.

“This is the work of Mr. Prof. Dr. Horst Kunhardt, Department of Business Informatics, University of App. Sc. Deggendorf and you can use the link here to a live demo to see how it works.  I was curious having written an ambulatory EMR years ago myself just to see how it all came together.  The system is created with open source software with my SQL and PHP for the demo shown.   If you want to read up a bit more on German Medical Tourism, here’s a link to follow. 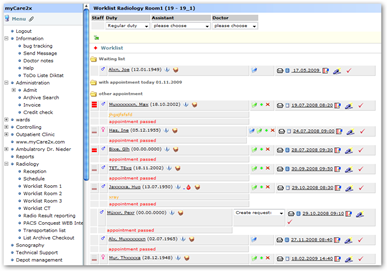 This brings me back to the intent of the post with the Medical Group Management Association's annual conference keynote from Dr. Bill Crounse of Microsoft and he makes the point very well in the fact that the need for the $150 million dollar systems need to come to a close – collaboration with innovation will be the winner as innovation alone as we are seeing is leading to nothing more than a further fragmentation of our systems and goals.  We can do this too without relying totally on mergers and acquisitions to drive all of this at the last minute and as Dr. Crounse mentions complicated systems now becoming a safety issue, and we are also seeing an increase in the use of scribes to deal with this complexity.  BD

While spending less per capita on health IT, U.S. hospitals also manage to spend more on individual projects, and Crounse said it “offends” him to hear about U.S. hospitals breaking their budgets on $150 million electronic health-record systems. He said some foreign hospitals can customize “off-the-shelf” products and wire their institutions for $3 million to $5 million with systems that can “run circles around” what is used here. “I hope the days of $150 million systems come to a close,” Crounse said. “They don't spend that much money in other countries and, often, they have better solutions.”
One specific problem Crounse cited was the lack of “intuitive user interfaces.” He noted how Seattle community physicians and nurses who may see patients in multiple hospitals need to learn how to operate multiple EHR systems that can vary greatly hospital to hospital. “It's a friggin' nightmare,” Crounse said. “Not only is it a nightmare, I believe it's a patient-safety issue.”