Laws and regulations are certainly getting more complicate as time moves on and the original reason for the grandfathering even was to allow employers to keep their existing plans as they are without moving under the new law with additional consumer protections.  Now with exemptions we have one more area to table and keep separate in data bases.  The complicated issues grow.

For some companies as mentioned below like McDonalds, they had the cost of administering employee benefits at the crux of the matter.  One local city council has already approved giving cash to employees to either get out or downgrade as I am guessing along with cost they are having issues administering their plan and it is becoming a nightmare with all the changing rules and stipulations.

Employees To Opt Out or Downgrade Health Insurance Plans

I am guessing too in time someone will challenge this in court too with the exceptions allowed for some and not for all without the penalty.  Last I knew laws were supposed to be for everyone and so how is this law going to be enforced, I just see a load of legalities questioned if not now, down the road.

Wellpoint even has added more information on the web (algorithms for calculation) to help employers promote grandfathering. 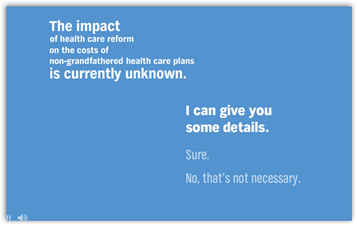 So much of this would have happened anyway with reform or not as the financial markets are driving everything, almost to the point of who gets care and who does not.  Doctors are not particularly pleased and are kind of in limbo in some cases determining if they are going to keep a practice open or close up shop and work for a hospital.

It is harder to make good laws today and again without having a ton of information and analysis data up front, this is what we see and granted nobody can predict everything but the law were repealed, same type of problems would exist with rate increases and insurance companies making record profits, that stays the same no matter what.

Healthcare and the open market divide keeps growing every day and as a consumer who knows what you have, what it covers and how to work the online algorithms to try to find out.    We have a ton of records on all of us over the years that also stand to contain tons of errors with human data input over the years too that needs clarification and is not always the gospel truth and some of that is getting mowed under the rug too with little or no attention.  BD

Employers may be allowed to switch their health insurers and still be shielded from costly coverage changes mandated in President Barack Obama’s health-care overhaul, a White House official said.

Under the law passed in March, once companies change plans they must provide added services, including preventive care. The U.S. is weighing whether to allow employers to avoid the requirements, even with a new insurer, as long as benefit levels stay the same, said a White House official who asked not to be identified because the talks are private.

In late September, the Obama administration exempted groups and companies from a requirement that would raise minimum annual benefits for low-cost health plans used to cover about 1 million part-time or low-wage workers. That concession came after restaurant companies, including McDonald’s Corp., complained about the potential for added costs. Another change delayed tax reporting rules by a year.

More exemptions could be on the way. “We’re working with everyone from the business community to insurers to state insurance commissioners to consumers to ensure a smooth transition,” said Jay Angoff, director of the HHS insurance oversight office.