This could be any patient’s worst nightmare, in the ICU and getting bitten by ants.

This was quite a large feast too as the video shows.  Click on the image below to see the entire story.  The man is 76 years old and the ICU was evacuated and pest control was called in.  The patient was in serious condition and has hundred of bites including his legs and genital area.

This is a rare type of attack and the ants were looking for food.  BD 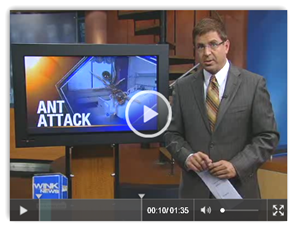 FORT MYERS, Fla. - A Fort Myers man is attacked by ants at a local hospital.

76 year-old Cornelius Lewis was bitten hundreds of times while in the intensive care unit at Gulf Coast Medical Center.

Lewis remains at Gulf Coast Medical Center. He's in serious condition, not from the ant bites, but from a different health ailment.

According to his son, Lewis has ant bites all over his lower body.

Right now, at Lee Memorial Hospital, Cape Coral Hospital, Health Park and Gulf Coast Medical Center extermination is underway. ICU has been vacated, sprayed and treated. Exterminators will check every three days for insects. It used to be on a monthly basis. Rooftops and exteriors are being sprayed weekly. This will continue until there is no ant sightings for 30 days.