This is interesting when you see who the majority owners are here with the investors listed, Goldman and Blackstone and the lawsuit contends they knew

upfront of the scheme.  The company has fined Healthmarkets but it makes you wonder where fines and regulation come together?  Do we just keep fining such organizations, they pay the fines and keep operating with “business as usual” here?

If you have read the news of late, there’s a lot of that type of activity going on to where we read “the company admitted no guilt” but racks out the dollars.  It all comes back around to how the plans were marketed and how due to the complications of policies, nobody can figure out what in the heck was covered.  So why is everyone accelerating their marketing, money with no real repercussions other than the chance of paying a fine?

I think all of us today just want care and are getting a bit tired of being constantly marketed for so many of those schemes that seem to good to be true and the old saying of “if it’s sounds too good to be true, it probably is” holds true.  Here’s one example of how selling MD and hospital information made millions and yet the accuracy of what is on the web does not hold the owners accountable.

Back to the case at hand, these folks have paid out fines and have just kept rolling

along with selling their complicated insurance programs that are calculated with risk management algorithms to make money.  As Wendell Potter has pointed out, paying out claims is considered a “loss” for investors, as patients we consider this care so the 2 obviously do not agree here on what the business of health insurance is all about and the business models and care divide are getting worse.

Once again we are looking at those “algorithms for profit” and if a little care gets thrown in as consumers we get lucky it appears and when you look at who’s running the algorithms here for writing these policies we are back to the folks using their “Algo Men” to forecast and create policies as such.  They give owners guidance too on how to make money, not take care of patients.

JUNK INSURANCE IS LEADING TO JUNK HEALTHCARE, NOT TO BLAME THE DOCTORS AND HOSPITALS WHO JUST WANT TO GET PAID – IT’S THE ALGORITHMS FOR PROFIT THAT ARE DETERMINING FACTORS. 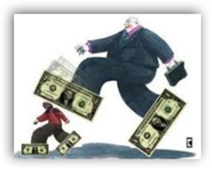 I said this over a year ago that we need a Department of Algorithms or something like this along the line and perhaps it can work under the US Patent Office but again I saw this over 2 years ago building to this point so please come to terms with the fact that formulas for profit have ruined the system and with or without reform, this was going to happen.  The government is basically stuck working with a group of companies that lack ethics and value for human lives and care and only care about their bottom lines.  BD

What happens when the “secret code” and algorithms are stolen and potential exposure is present, shear panic.  BD

A national health insurer and its majority owners, Wall Street powerhouses Goldman Sachs Group Inc. and Blackstone Group, were accused in a lawsuit Wednesday of defrauding their California customers with "junk insurance" that provided little or no protection.

It also contended that Goldman Sachs and Blackstone knew about the alleged insurance scams in California when they bought a majority stake in HealthMarkets in 2006.

The lawsuit is the latest trouble for the Texas company, which conducts business in 41 states. In the last two years, regulators from California and more than 30 other states have fined HealthMarkets or its affiliates nearly $40 million over alleged deceptive business practices.