If you have not heard about the new technology coming out for Xbox 360 it is Kinect and we are looking at the same with computers and according to what I read here, Microsoft will now have the intellectual property and the chip to make this come to life on PCs.  The first thing that of course comes to mind here with being in Health IT is medical record programs and this is almost an MD’s dream come true, fewer clicks and a better way to interact.  Dr. Crounse over at Microsoft has also touched on this with the Natural User Interface potential in healthcare too.

What is of interest here too is the fact that Microsoft has bought the competitor and their chip is used in the Xbox 360. Quanta, a Taiwanese company that manufactures laptops for many of the major brands, has also invested in Canesta and expects to build laptops this year with 3-D camera modules and this technology can be used with manufacturing to give robots eyes…interesting stuff out there.  This is kind of a change for Microsoft to have ownership of it’s own chip technology versus the dependence on companies such as Intel and NVidia.  There’s no question here on Microsoft’s commitment to 3D and imaging to continuously improve the user experience.  BD 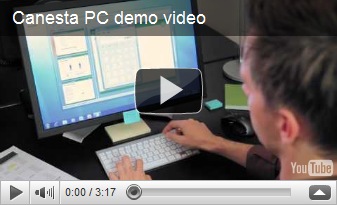 this one by all means and to have 3D available one day would be wonderful.  I use it as a computer and put a USB TV tuner in it and it does the Media Player thing quite well.  By the way stay tuned here as at some point in time there will be a contest to give one of these away here at the Quack too.

I can write on the surface with the TIP interface too so really no keyboard required for web searching and accessing information too.  BD

Lenovo ThinkCentre M90z All In One Desktop Discussion

The New York Times reports that Microsoft is buying Canesta, a Silicon Valley company that makes chips for 3D and gesture-recognition technology.

The acquisition would give Microsoft access to chips for incorporating its motion-sensor technology, currently debuting in Kinect for Xbox 360, into other products. CEO Steve Ballmer and other executives have

repeatedly said they expect gesture recognition to not stop at video gaming and entertainment.

Canesta's chips enable a digital camera to determine the distance between it and an object, hence allowing devices to perceive the world in three dimensions, according to the small company's website. The Sunnyvale, Calif.-based firm of about 70 employees also touts a long list of U.S. patents in which Microsoft is bound to have interest.

Microsoft's Kinect, interestingly, uses a depth-mapping chip from PrimeSense, a Canesta competitor. In 2009, the software giant also acquired 3DV, which had similar technology.