Nobody likes fraud and me included but with having information floating around out there that includes “dead doctors” and other erroneous information, this is scouting ground for crooks to look around and figure out where fake and fraudulent claims 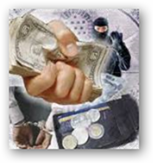 can be sent.  If someone is already working in the medical billing area then they can figure out how to get the NPI numbers and other relative information for starters.

Now when you see a deceased MD on the web along with the type of insurance they honor, dead ringer here as the crooks figure out the information has not been updated in a long time and off we could go with fraudulent medical billing Bingo.  This is just one example but what’s to stop a real crook that wants to make some serious money, and we hear in the news about those folks who go for year until caught.

Crooks have to figure out how their billing algorithms are going to have to flow through the system so they don’t get caught, so they do algos too.  In the example below 3 people billing their ass of with fraudulent medical claims.   This is one more reason why software is not going to catch all the crooks as they work hard at it as they have only one focus and are not seeing patients.

Here’s an example, those anti fraud algorithms didn’t catch these folks at the link below, the FBI did and reported it to the anti fraud company to start checking for these issues, gee is that not what they thought they were paying for?

Case in point here, all algorithms can be created differently and how they actually deter and find fraud is different.  More often than not we have false positives and this is where the providers go through a ton of time and have to show proof on everything and the patient get drug in here too.  The case below goes back a couple years ago to when HealthNet agreed to pay their out of network claims at 14% over the Ingenix rates in the software.  No fraud here but just underpaid doctors.

Ok so back on course here if all this information is floating around out there and you have crooks constantly sniffing, this proves to be a source of information to where potential billing fraud can occur as in the case of my former doctor, nobody had touched that listing in a long time and was in error from the day it was put out there as she had been dead longer than the websites have existed.  The research sites get their information from State boards and insurance companies so again the crooks can analyze and get an idea too of who’s watching the shop and they could use the Social Security Death Index too, so with everyone else mining data, these folks are no exception when there’s big potential for fraudulent billing.

Gee I wonder why more inroads are not being made with fraud?  This oncologist got caught in Orange County, was slapped on the wrist and continued to send fraudulent billings for a number of years before they finally caught him for good and by the way he is rated as a 5 Star Doctor as of today on HealthGrades even though his license is gone and he’s going to jail.  This all took place in April of this year but he’s still on the list for consumers to find. 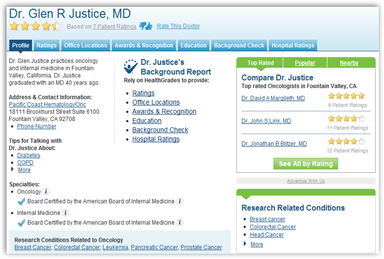 He’s still on a few other rating sites too and obviously the crooks will stay away from this one as he was his own crook.  It will happen with all the mining that is done today on the web with listings that are not up to date contributing toward the growth of medical billing fraud, and the sooner we recognize, the better with this unintentional consequence associated with not updating information.  BD

This just goes to show you can’t really believe every thing you read on the web.  I came across this by accident when doing some searches relative to the Medical Quack.  I went to an obgyn doctor for many years and was very happy with her and would still be a patient today except for the fact that she unfortunately passed away from breast cancer.

The Medical Quack: HealthGrades And Other MD Rating and Referral Sites List “Dead Doctors” on Their MD Information Pages And Even Include the Insurance Plans the “Dead Doctors” Honor