Medi-Cal reimbursements are about the lowest in the country for doctor and hospitals in California.  I don’t even completely understand the concept here with the matching federal funds having not seen all the details, but n short the article states 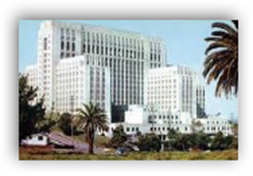 that by contributing in 4 payments to a general fund, it will release additional federal funds to help make up for losses last year when the Medicare (Medi-Cal) cuts took place.

Hospitals like Kaiser stated they contribute but they don’t serve Medi-Cal so their efforts are more of a contribution and everyone makes out in the long run with better care and facility upgrades.  Half of Los Angeles hospitals are operating in the red so it’s a real challenge for some to get the money together but as stated they get it back and then some in the end.  BD

California hospitals have begun paying billions of dollars into a state-federal program as a way to reap even more money to spend on improved patient care, seismic safety and a range of other projects.

Under state legislation signed by Gov. Arnold Schwarzenegger last month, the hospitals will pay about $3.1 billion into the program and will get that money back in federal matching funds, plus $2.6 billion.

In the San Fernando Valley, for example, Valley Presbyterian Hospital in Van Nuys expects to net about $5 million by participating in the fee program.

The hospital plans to use the money to help care for Medi-Cal patients - reimbursement rates were slashed last year - make seismic-safety improvements and remodel emergency departments and other facilities.

"This is a critically important program," said Gustavo Valdespino, president and CEO of Valley Presbyterian. "We are a safety-net hospital here in the Valley, taking care of a great percentage of Medi-Cal patients."

At least 60 percent of the patients at Valley Presbyterian are on Medi-Cal, the state's program to provide health care for the poor. The hospital serves roughly 4,500 patients a month in the emergency department. Valdespino said the hospital believes it has been underpaid for years for serving Medi-Cal patients.

The program, created through AB 1653 by Assemblyman Dave Jones, D-Sacramento, was written to help California hospitals recoup some of the $4.6 billion they lost in 2009 because of lowered Medi-Cal reimbursement rates.

At the beginning of this year, more than half of Los Angeles County's 72 hospitals were operating at a deficit, and two - including Pacifica Hospital of the Valley in Sun Valley - filed for bankruptcy protection.