MeetTheBossTV was the exclusive media partner at last week’s CFO Healthcare Summit in Miami and offers their summary and thoughts of what transpired at the convention and it’s measure of success as many healthcare CFOs were in attendance. .  So here without much more ado is their evaluation and summary.  BD

causes and effects of the new healthcare reform.

Since the Reform proposal back in the spring there have been endless and conflicting statements outlining the potential pitfalls of the proposal, and the effect it will have on the American healthcare system. However those in attendance last week only dealt with the facts and how they will implement a variety of systems to deal with the changes.

The government believes that by insuring everyone, the cost of healthcare-per-person will decrease significantly; at the moment those who can afford their insurance usually cover the costs of those who cannot. The problem has now been faced head-on and the CFO Healthcare committee believe that without the reform the problem would have continued to deteriorate.

The meeting began by discussing the critical strategies in preparing the healthcare for the decade ahead, Marc Holland – CEO and MD for Systems Research Services outlined the need for capital budgeting, the new healthcare reform legislation, and strategic IT decision making. Bill Donato – Executive Director Supply Chain Management and Carol Harding – Senior Director Supplychain management at the Cleveland Clinic also discussed how to compete within the ‘Age of Reform.’

“The Healthcare Supply Chain, from manufacturer to provider and ultimately the patient, can no longer be ignored or counted on to contribute small incremental savings through price over price and/or inventory reductions.” 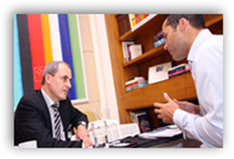 excel clinically while driving operational excellence. They understand that in an era of declining revenues and spiraling costs, engineering supply chains and implementing new systems is the only way to keep up with the competition.

“In order to reduce the organizations cost basis the Supply Chain must be reengineered utilizing business practices that industry has been using for the last decade to respond to their provider customer's financial concerns. Expanding service lines, streamlining operations and reducing waste and errors will be critical to success.”

The new reform will inevitably cost more money. It would be almost impossible to provide an equal service to everyone at the current price. To cover more people, costs must be controlled and some cuts will be necessary. The Affordable Care Act will save Medicare an estimated $8 billion in the next two years and almost $418 billion by 2019. Affordable care will drive down the costs for everyone, and save the Medicare system, from fraud and inefficiency. The Congressional Budget Office found that health insurance reform will reduce the deficit by over $100 billion in this decade and by more than $1 trillion over the following 10 years. It is up to the industry to carry this out now the government has settled on a decision.