Wake Forest University School of Medicine is where they grow body parts.  Both

60 Minutes and Dr. Oz have paid a few visits to the facility and I’ll include the 60 minute video from last year that talks about the human bladders they have grown and implanted in humans, some pretty miraculous stuff going on there.  You can read the prior post at the link below for more details. 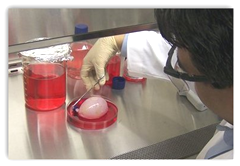 The Center is growing more than 22 different types of human cells to include livers of course and they have over 100 projects in the works. Now they have also grown a penis for a rabbit too, and you can read more at the link below as it worked and he produced offspring.  This is work in progress to use for humans one day too.

I have also done some interviews too with Cook Medical who works with another form of regenerative medicine with building scaffolds where the body regrows cells and portions of skin and organs too.

Here’s the coverage from 60 Minutes from 2009 below.  It’s funny in the areas I cross on this blog too with some of the comments I get as about a year or so ago I had a scientist chime in here and talk briefly in the comments section about how he/she has created the beating heart cells in a dish and made the comment that it’s not that hard, well maybe for them, but certainly not a cakewalk or task for me or any other non scientist.

One other item of interest is to watch the lab use normal printing cartridges to produce cells and body parts, it just pops right up, fascinating video.  Right now the human liver they produced is too small and there’s more work to be done but the fact that it has been grown is a miracle and someday we can hope for less dependence on organ transplants and grow them!  Watch the video below, fascinating.  MIT is also growing rat livers and you can follow some of their progress here.  After you see the video with the printer, check this link out below as it is related and see how 3D printing can kick out a prosthetic leg by design too.  BD

It's only an inch in diameter - not big enough to work for a human.
But the hope is to someday grow bigger livers for people who need them, or to use them for testing new drugs.
To engineer the organs, the scientists used animal livers that were treated with a mild detergent to remove all cells, leaving only the collagen "skeleton."
They then replaced the original cells with two types of human cells: immature liver cells known as progenitors, and endothelial cells that line blood vessels.