This lends itself to an area whereby various area of cancer could be targeted, and with few or little side effect as the study states.  The term "cellular immortality" is the term that describes cells that keep regenerating endlessly, like cancer cells do. 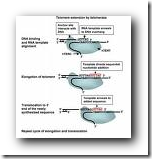 enzyme for cancer therapies, but one more step forward and a lot more research will carry forward.  If the enzyme can be targeted to stop the growth of tumors, then this could clearly be one big breakthrough.  BD

PARIS (AFP) - Researchers have broken the code of an enzyme (TERT) that plays a key role in the growth of most cancers, opening a path that potentially leads to a new class of anti-cancer drugs, according to a study released Sunday.

Other scientists who reviewed the study hailed it as a breakthrough in fundamental cancer biology, but cautioned that much work remained before the exploit could be translated into next-generation therapies.

The enzyme, called telomerase, "is an ideal target for chemotherapy because it is active in almost all human cancer tumors, but inactive in most normal cells," said Emmanuel Skordalakes, a professor at the Wistar Institute in Philadelphia who led the study.