This procedure is not approved for us in the US.  It is not inexpensive either at 25-30K per procedure, but good money for the physicians getting paid from 5-7k for their work.

There are opinions on both sides of the fence and like anything else today, there has not been one cure all that works for everyone.  So what is the big attraction for this procedure, well not having to deal with sexual impotence and urinary incontinence are 2 of them, but there are those who have not had success with eradicating the cancer and some have to wear a catheter as a result of the procedure. 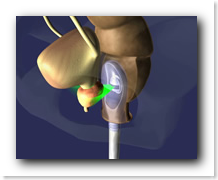 Again, I would maybe guess to also say the stage of the cancer at the time of the procedure might have a big impact here as well.  One patients comments:  "Mr. Reinwald, a retired lawyer who is the founder of the Cancer Cure Coalition, an organization seeking new cancer treatments, said that HIFU should remain available and that he had not asked the Web company to remove his testimonial.", so there is someone it didn't work for but he still thinks it should be a procedure offered.

The procedure can take hours and repeated if necessary, and then there is also the opportunity for radiation and other procedures as well.  That appears that it could be somewhat of a gamble though if the cancer is spreading at a rapid pace.  The procedure is also available in Canada.  Clinical trial information can be found here.  BD

PUERTO VALLARTA, Mexico — Some weekends, more than a dozen American men wait at beachfront hotels, anxious for their turns in the treatment room at a small private hospital here.

The treatment is called high-intensity focused ultrasound, or HIFU (pronounced HIGH-foo). And instead of using surgery or radiation, it attacks the cancerous tissue by heating the prostate to temperatures near boiling.