FDA Shackled at the Ankles?

UPDATE:  Endotec urged the agency to lower the classification to eliminate the need for more clinical studies in the past and were never accepted.  Then in 2006 the FDA filed a lawsuit.  Now the patient has expired and the judge stated patients can continue to benefit from the ankle replacement, but what else does this mean?  Well now that the patent protection is gone, other can manufacture such products, for a simple example, DePuy, a division of Johnson & Johnson, is conducting a clinical trial on a similar design.  There were issues with the original clinical trials, but the company still contends the device should have been downgraded and not in the same category as Class III devices, which include heart valves, pacemakers and some joint replacements and require clinical trials.  So where do you go when you need an ankle, out of the country?  BD 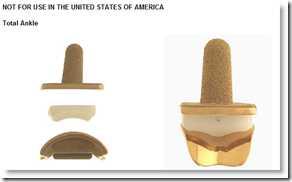 WASHINGTON -- It's not often the little guy takes on the federal government and wins. Endotec, a small South Orange maker of orthopedic devices, did just that this summer after years of fighting with the Food and Drug Administration for permission to legally market its unique ankle joint replacement implant.

The victory came after the FDA sought a court injunction barring the company from making and distributing the Buechel-Pappas Ankle, accusing it of trying to evade the law after it "failed miserably" during a clinical trial to test the safety and effectiveness of its product.