I had a couple friends drag me away from the computer and the blog today to watch a taping of a new talk show series starting this fall.  So why is this here on a medical blog, well Bonnie Hunt was an oncology nurse before moving in to the entertainment business.  What she learned as 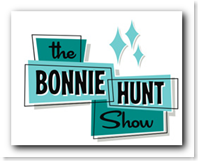 a nurse has been an inspiration to begin the new talk show and below you can see a list of the charity work she supports, mostly all healthcare related.

The show was great and just down to earth and that is the way she wants it presented.  In today's show she reflected several times on her time spent as a nurse.  I really enjoyed being part of the audience today and as usual, sometimes you never know what you might find here on the Medical Quack, but if it relates to healthcare in any way, chances are you will find it here.  I have a feeling there will be healthcare issues on the show as it progresses too.  They also taped a segment for "Extra Extra" today which will be aired I believe on September 8th, so you can keep your eyes open for the interview there as well.  Today's guests included Glen Campbell, now that is a blast from the past for all of us old enough to remember!  Check your newspaper listings as to where and when the show begins, or you can also visit the website for more information.

All in all a fun day and it got me away from the computer for a few hours!   Many thanks to my friends that brought me there!  It had been a while since my outside sales days since I had been in a studio, one area where I used to conduct business, so this was nice to revisit as a guest years later.  BD

"Growing up in one of Chicago's blue-collar neighborhoods, Hunt pursued an acting career with the famous Second City improvisational theater while continuing to work as an oncology nurse at Northwestern Memorial Hospital. She soon became familiar to audiences with her unforgettable cameos in such films as "Rain Man," where she played the toothpick-dropping waitress, and in "Dave" as the White House tour guide. Her improvised line, "We're walking, we're walking¦" quickly became famous as people embraced Hunt's unique accessible brand of  humor."

(Speaking of Chicago, you can also see the Medical Quack featured in the Chicago Sun Times from posts on this blog...BD)

Bonnie continues her charitable work, raising funds to sponsor research for treatments and cures for cancer and rheumatoid arthritis, and also gives time to support organizations such as The Make-A-Wish Foundation, The Christopher and Dana Reeve Foundation and American Veterans.