Home » Medically Related » Other Items of Interest » Technology » Man Finds Thousands of Medical Records in Storage Unit he won with a bid $25.00 for the unknown contents

Man Finds Thousands of Medical Records in Storage Unit he won with a bid $25.00 for the unknown contents

This is one of those strange ones out of the coffer here, man bids $25.00 for the unknown contents of a storage unit and what in the world does he get, stacks of medical records!!  Obviously paperless records were not on the agenda for Southwest Medical Association.

Gee, is there no shame anymore!  The old saying that one man's garbage is another's treasure, but certainly no treasure here and he himself had been a victim of stolen identity himself, so no treasure here, but instead someone who knew what to do and nice that the records didn't fall in to the wrong hands.  I would really like to hear more on this one as the story develops too, how obscure that a medical association would allow this to happen.  Many medical firms have to store paper records off premise but they also have to take responsibility for them. 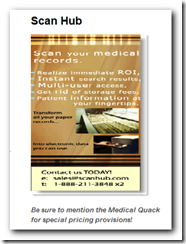 How disappointing, hoping for a treasure and getting paper medical records!!

If you find yourself in a situation like this, consider a company like Scan Hub on this page that can image all the paper files for you.  Sure it costs, but so does storing boxes of paper, plus the data is much more secure as it is encrypted and down the road can be linked to electronic charts.  It sure is much easier to keep track of an encrypted drive with records than boxes of paper charts!  BD

It was a shocking discovery in an abandoned storage unit. Thousands of medical charts, all listed to Southwest Medical. Larry Coldmire bought the contents of the storage unit for just $25 dollars in an auction.

He had hoped to find treasures that he could turn into a profit, but what was there instead is identity theft just waiting to happen. "That was a little bit too much information because I don't want anyone getting in touch with my medical records, because I have had my identity stolen before and I am still fighting with it in the credit bureau," he said. Coldmire has alerted police to the records left by Southwest Medical Association. He tried to call the medical group, but a recording said the number was out of service.