from benign non life-threatening arrhythmia or electrical noise sensed by the device.  When you stop and think of all the many devices that are out in the world today who knows if maybe your phone or any other device could be transmitting noise so the extra protection seems to be a welcome add on in any circumstance.  As stated below the device also connects to the Medtronic CareLink network. 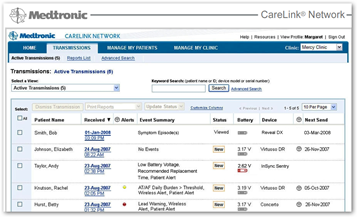 MINNEAPOLIS – March 28, 2011 – Medtronic, Inc. (NYSE:MDT) today announced U.S. Food and Drug Administration (FDA) approval of the Protecta™ portfolio of implantable cardioverter-defibrillators (ICDs) and cardiac resynchronization therapy-defibrillators (CRT-Ds). The new family of implantable defibrillators features SmartShock™ Technology, which includes six new Medtronic-exclusive algorithms that recognize life-threatening arrhythmias and deliver therapeutic shocks only when appropriate,¹ therefore enhancing patient quality of life.2 Findings from the Virtual ICD study, based on a statistical model, shows that 98 percent of patients with SmartShock Technology will be free of inappropriate shocks one year after implant and 92 percent will be free of inappropriate shocks five years after implant.1  Shipments of the Protecta portfolio of products will begin immediately.

“With recent studies showing that up to one in five patients may experience inappropriate shocks, this new technology can significantly mitigate that concern and will have a real-world impact on my patients’ lives by improving quality of life,” said Kent Volosin, M.D., cardiologist at the University of Pennsylvania in Philadelphia.

Implantable defibrillators are designed to provide lifesaving shocks or painless 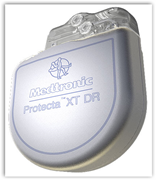 While the majority of shocks delivered are necessary to treat potentially fatal arrhythmias, studies estimate that up to 20 percent of patients with implantable defibrillators may experience inappropriate shocks in response to a benign arrhythmia or electrical noise sensed by the device.6, 7, 8, 9 Additionally, data show that 61 percent of patients who received an inappropriate shock visited the hospital, clinic or emergency room at least once within three days of receiving therapy.10

“The Protecta family of devices addresses one of physicians’ top needs—allowing them to better serve patients by providing devices that are designed to deliver a shock only when needed to save a life,” said Pat Mackin, president of the Cardiac Rhythm Disease Management business and senior vice president at Medtronic. “This new innovation is the latest example of Medtronic’s 20-year leadership in shock reduction technology through product innovation backed by industry-leading clinical research.”

The Protecta implantable defibrillators include SmartShock Technology, six new Medtronic-exclusive solutions, five of which were not previously available. The algorithms are automatically on when implanted and address the industry-wide issue of inappropriate shocks. They include:

· Wavelet + PR Logic, SVT discrimination in the VF zone, and Confirmation + in Protecta devices are designed to detect non-lethal arrhythmias and deliver lifesaving shock therapy only when necessary.

· Lead Integrity Alert, first released in 2008, provides advanced warning of potential lead fractures so the patient can seek medical attention, and reduces the risk of receiving an inappropriate shock.

All Protecta XT devices have OptiVol® 2.0 Fluid Status Monitoring, a new update on the Medtronic-exclusive feature that measures changes in fluid build-up in heart failure patients to identify patients at risk of worsening heart failure.11 Medtronic implantable defibrillators have Conexus® Wireless Telemetry that allows patients to transmit device data to a physician’s clinic from virtually anywhere via the industry’s largest remote monitoring system, the Medtronic CareLink® Network. CareLink serves more than 4,000 clinics and 500,000 patients in 30 countries.

Medtronic, Inc. (www.medtronic.com), headquartered in Minneapolis, is the global leader in medical technology – alleviating pain, restoring health, and extending life for millions of people around the world.

Any forward-looking statements are subject to risks and uncertainties such as those described in Medtronic’s periodic reports on file with the Securities and Exchange Commission.  Actual results may differ materially from anticipated results.