Hospital Using Kinect Technology In the Operating Room To View and Manipulate Imaging-Saves Having to Rescrub! (Video)

No this not using Kinect to do the surgery, but rather to use gestures (which means they don’t have to touch anything) and view patient images.  This is huge and a big 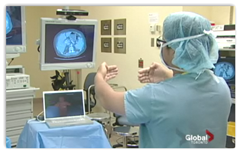 timesaver for the OR.  The motions are translated into commands.  It has been used six times so far and is working, so we are not playing games in the OR, but rather using the technology for efficiency here and saving the surgery crew scrub time, since they don’t have to touch anything.

As patient having surgery, this will get you out of the OR faster.  If they want to zoom in on an image, Kinect can do it.  A computer is not a sterile instrument in the OR.

There’s a few more instances of physicians working with Kinect too and the links below can fill you in on a couple of other possibilities.  The daVinci and Kinect could become friends and working partners before too long. 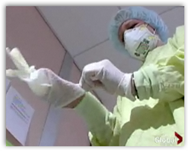 Here’s yet one more example of using a PACS imaging system with Kinect.

The “no touch” system allows doctors to stop the image, go backwards, and so on.  When removing a cancerous tumor and the location being available to view with no touch can change the way surgery is done and it’s very affordable!  The hospital has focused so far on tumor removal but will be experimenting on other types of surgeries too.  The surgeon never has to leave the patient’s side or try and commit the image to memory.  This is very cool!  BD

TORONTO - Doctors at a Toronto hospital are banking on video game technology to save time and prevent contamination in the operating room.

A team at Sunnybrook Hospital has started using the Xbox Kinect, a hands-free gaming console equipped with a motion sensor, to virtually manipulate key medical images during surgery.

The doctors use hand gestures to zoom in and out of the images or freeze a particular shot without leaving the operating table.

Surgeons typically have to leave the sterile field around the patient to pull up images such as MRI or CT scans on a nearby computer.

He compares the Kinect technology to a car's global positioning system, because it allows the user to get oriented without stopping.

With better control over the images, surgeons can be more precise, Law said. For a cancer surgeon, that could mean saving more healthy tissue when removing a tumor, he said.