Now a few more details have emerged and it appears he had help from his 25 year old son, and if nothing else besides spelling trouble it shows where young minds 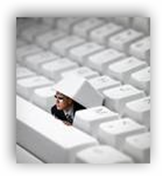 are at today.  In reading the content it looks like it was the old reliable key logger/screenshot software that was installed on his computer.  That’s always fun doing a network install of spying software.  I had to do it a few years back with a problem employee who didn’t have enough work to do at the time as was bordering on some privacy issues with internet activity.  It works good and gives you everything you want and packs it up and emails to it you, so you don’t even have to be there.

Obviously though, anyone in IT hates to do this, I did but when vocal warnings are given and many talks fail in my instance, not much choice left but to dig in and get the information and see what was happening in the doctor’s office.  Believe me it’s the absolute last thing an IT person wants to do but when you have privacy issues and breaking the law involved, well you get the picture.  The story below further goes on to talk about the 84 year old mother’s account and I don’t know about you but my 86 year old mother is not quite that savvy.

You have to remember on an email exchange the administrators have access to passwords and everything else you do so again, not wise to try and run such activities from work at all.  Now with newer sophisticated software it creates an entire data trail too so the investigators paths are all documented as far as what was captured, when and so on as you don’t want a double whammy and have IT folks not performing their investigation in a less than professional manner either, and than can happen, so the data trails that document and report everything are valuable for all concerned.  Moral of he story here, just don’t do it as the data trails will eventually catch you one way or another and this is the same type of regulation

we are hearing discussed in the news with tracking banking transactions too, so again when problems occur, you can go back and unravel and trace each step and move that was made.  Most sophisticated hospital systems operate the same way and yet we continue to hear how folks still try to beat the system and access areas where they are not supposed to be either.  BD

DON’T TRY TO FIGHT THE AUDIT ALGORITHMS AND LEARN AS MUCH AS YOU CAN TODAY ABOUT AUTOMATED MATHEMATICAL PROCESSES TO SAVE YOURSELF SOME HUGE EMBARRASSMENTS AND PROBLEMS WITH THE LAW, DATA AND PERHAPS OTHER SITUATIONS.

Liang has worked at the FDA since 1996 in the Office of New Drug Quality Assessment and had access to the agency's internal tracking system for new drug applications. He earned a salary of $122,744 a year, according to a court document.

He was able to monitor confidential information about whether and when the FDA was about to approve certain drug applications. He and his son used several brokerage accounts to execute trades, prosecutors said.

One account was in the name of Liang's 84-year-old mother, who lived in China, according to the SEC.