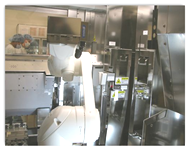 compounding, filling and so on.  One of the big advantages is that there’s no human hand touching so thus any risk of contamination is reduced to almost zero.  In addition the IV solutions are safer and the robot has it own compounding system.  In addition is has it’s own ultraviolet pulse for sanitation.

In addition there’s a complete electronic audit trail to trace back every script filled.

The robot handles chemotherapy drugs as well.  It has it’s own waste or trash can area inside.  It even can create syringes too. The system has been in place for a few months now.  Everything is bar coded coming right from the manufacturer.  All medications are stored in boxes inside the robot.

What gets produced is a “ring of medications” in other words one for 10 o’clock meds, noon meds and so on.

They actually have 3 robots and one is for cancer and other high risk types of drugs.  So far they have not had one pick error yet, so it’s working well.    Probably in time every hospital will be converting to robotics with pharmacies as unlike some other technologies that still have to prove themselves, this one is a hands down for safety and all that is needed is money.  BD 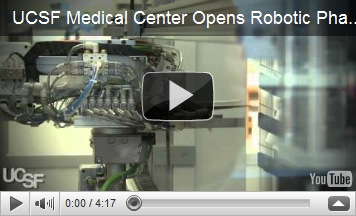 The University of California at San Francisco Medical Center is now starting to use robots, not humans, to dispense medication from its hospital pharmacy. While robots are often brought into workplaces as a cost-cutting measure, UCSF claims that in this case, it's to minimize the chances of patients receiving the wrong medication. So far, it seems to be working out well – out of 350,000 doses of oral and injectable medication prepared to date, not a single error has occurred.