Hey this is my own backyard and the hospital is a very good one and if you read here enough you know software but also deal with reality very well too.  How much use is this going to get?  I’ll bet not a lot as I know the demographics of the

area and many years ago I had a few surgeries at Fountain Valley.  So why is this glut?  Actually a while back too the hospital using a robot was able to get accredited with being a heart center, so a lot of good stuff but now back on topic.

First of all this is a Tenet Hospital, last I looked, and they have a data center which I believe is still there.  It’s right on the hospital premise and they worked with Perot with a lot of consulting before the Dell buy out.  Get the picture, we got code heads over hear and let’s get on the map to show we can innovate, problem is no collaboration as I always say.  I just hate to see software go to waste with consumers not using it.  This is one for the moth ball closet and I would love to be wrong on this statement by all means, but again let’ get real here.  I know a few MDs on staff over there, and while on the subject, let’s not forget my former obgyn who was still listed by HealthGrades 8 years after her death and she was listed practicing at this hospital.  Again, my efforts here with awakening those to what goes on with data and the multitude of flaws out there.  My former doctor even did clinical trials in the after life.  (Since my discussion with the AMA about this she has been removed but there’s tons more errors out there) 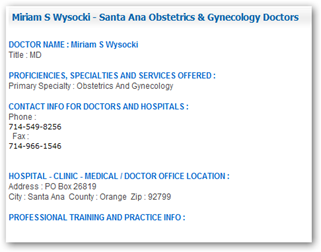 I am all over Orange County trying to tell consumers about PHRs too, how many do you think know what this is.  I’ll give you a hint, not many and this includes hospital employees and doctors too, what a surprise.  With that in mind what in the heck are we doing with yet one more piece of software out there?  It’s specific for the hospital so I would think that Tenet would create one that works everywhere right?  The code heads are in Fountain Valley though. 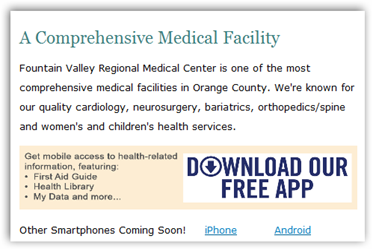 We just don’t collaborate and seem to be stuck on the word innovation and you can innovate all over the place but if software doesn’t work together, well it just end up creating a new source of revenue and expense with middle ware folks and integrators to come in and write more code to make it communicate.  We are going through this all over the US right now, it’s called HITECH and HIE and the government is paying dearly due to years of non collaboration and everyone building the better mouse trap.  By the way every time I run this post through Twitter, it is read very well and repeated.

I even have to remind myself sometimes as when speaking on the web with some of the smartest and affluent folks here, that this is not the way it is in the real world and coders get all these software orgasms in their system and can’t help themselves.  I used to write code and had some thing like that come over me too so they need a look at the real world now and then to bring them down to earth, as well as the bone head administrators that get all excited over products that are “for those guys over there”.

You would be hard pressed today to find any administrators in most systems (with perhaps the exception of Kaiser and a couple others) that eat their own dog food.  That’s the problem is that these minimally educated digital executives buy in hook line an sinker as long as “they don’t have to put any effort out”.  How much is that algorithms in the window worth???  If you happen to be Facebook with Goldman Sachs over selling to make huge profits, I guess a lot, but we can live without Facebook but not as well without our health data.

WHEN’S THE LAST TIME I HEARD AN EXECUTIVE OR ADMINSTATOR OR EVEN A DOCTOR FOR THAT MATTER TALK ABOUT HOW HAVING THEIR HEALTH RECORDS IN A PHR HAS BENEFITTED THEM, NOT HEARD IT YET!!  SO LET’ BE REAL HERE AND TALK ABOUT THE REAL WORLD.

If we keep up this way in this imaginary world of software we keep building that few or none are going to use the bubble is getting closer, so let’s get some common sense going here.  This article too has been well read and agreed with on the web in many circles.

Where is this plan for improving digital literacy that HHS talks about??  Does Ms. Sebelius use a PHR and care to elaborate on how it helps her with her own health?  I have not seen anything from her or any one else, even at the ONC who’s job is to get everyone connected electronically, how it it guys and gals?  Got any inspiration or role model information to share?  Inquiring minds want to know.

We have a bunch of what I call the “non participants” that over and over again keep talking about the fact that it is “for those guys over there”.  This is a big reason why we have such distrust today with the American public and why they wonder “if those folks up there really know what they are doing and what’s going on”.

I would much rather see them spend money on a hand washing software system like the VA is doing rather than throw out more glut software.

As patients we are worried about the cost of healthcare and how our data gets sold too.  No wonder we don’t have time to read up.

Continues and the Data Bases Gets Larger with Technology

HHS also put out some grant money, which always like and don’t complain but again until you explain how algorithmic healthcare has bee created and is working, it’s a waste of time.

Again I would really like to see some real collaboration and efforts made to bring everyone into the healthcare arena and once and for all stomp out “Magpie Healthcare”.  For starters could use some better role models too with some better intelligence in Congress.  If they raise the level, guess what, Wall Street will and they are the kings of algorithms that have been used to redistribute the money in the US over the last number of years.  IBM Watson technology would be a great help to those making laws.

It’s time for some reality checks here and getting in touch with the real world and stop this algorithm addiction that serves only to feed the keyboards and egos of some of the code heads and give them some better direction to put useful and integrated software out there.  I said a couple years ago on a post here that data addiction was going to be our next 12 addiction program.

Again, I like software, wrote my share of it but this is what also gives me the ability to think about what is “junk software” today and combine both the common sense of the real hands on world and the code that goes nowhere.  Just because you build it and spend time and money doesn’t mean they will come.  As a matter of fact here’s one more interesting post from the recent past that also talks about priorities of software that people like to use today and the lack of education given to explain algorithmic processes and what really goes on behind the scenes with servers that run 24/7 and make the decisions you see on your computer screen.  BD

The application enables users to view wait times for the emergency department; register to visit the ER at a specific time for non-emergent care; and complete a "My Data" list of allergies, emergency and physician contacts, insurance information, medical history and medications. It also enables access to hospital maps and directions, a list of frequently called hospital numbers, a first aid guide, health library and an online physician finder.

The application operates on iPhone, iPad, iTouch and Android products, with BlackBerry support coming in May. More information is available at fountainvalleyhospital.com.