The Clippers, as stated in this article play in a rent-free arena in Los Angeles and with any professional sport team, that’s usually a big cost, but the real story here is that it paints a very bad picture of the owner and how self centered and selfish 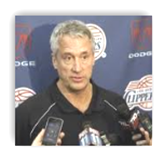 people can be.  To not allow healthcare coverage for the team coach is horrible.  Good thing the players didn’t see it that way and are actually the real reason he was able to get his care, which was around $70k.

We have a few of these types of folks that exist today and we read about it in the business section of the news all the time where they seem to have no value on human life, except for maybe their own and if they need care then all hell breaks loose.  Here’s a run down on Donald Sterling, now branded one of the worst people on earth from Wikipedia.  As the article states, this may turn the way we may sometimes think about those in professional sports, especially this owner and the coach who needed care and thank goodness for the players, who are still human.  BD

Up until Tuesday afternoon, the only functional knowledge I had of

And now we're passing the feel-good savings on to you, in the form of an anecdote that reveals that NBA players Corey Maggette(notes), Marko Jaric(notes), Chris Kaman(notes) and Elton Brand(notes) all chipped in to pay for expensive life-saving surgery for Hughes, after the Clippers organization (read: Donald Sterling, noted worst person in the world) declined to cover the costs.