We keep hearing that healthcare is eating us out of house and home, which it literally is, and here’s a good visual of where the money for IT expenditures lies.  Remember though we do not get to take advantage of any savings that cloud services may represent here as the Senate doesn’t understand this and will not fund cloud services.  Is that nice or what, duh?

It makes as much sense as having a 91 year old head the Science and Research Committee in the house, both of the above are true statements.  No office but I won’t either be as sharp at 91 if I make it that far either, happens to all of us.  Defense as you can see is big and HHS funding is #3 on the list due to size.  We all know there’s 8 years of total IT neglect from the prior administration that we have to deal with and we can’t change that but rather have to move forward and make sure it doesn’t continue if we want to build and get jobs back. 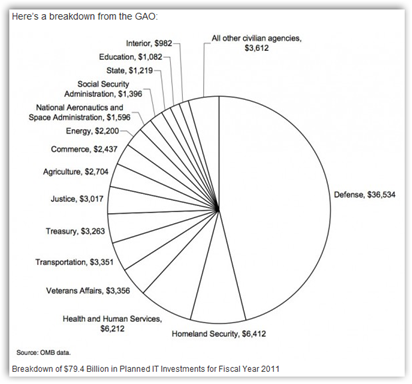 Again, what’s up with these folks in Washington, at times?  I really want them to try and utilize some technology to make it easier for them as with using IBM Watson and speech recognition, even the lowest participant elected to office can query and find information easily.

They need some “Algo Men” on staff soon.

Goldman is investing in what they know – ALGORITHMS.  That’s what runs their shop and they have plenty of Algo Men on board to produce all their predictive analysis of what will occur in the future.  There’s one other 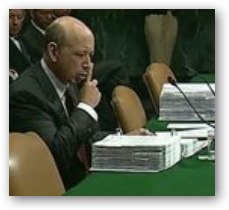 element of predictive behaviors and to get those, you need some behavioral analytics too and I could almost bet there’s some those algorithms rolled in there too. Somebody takes Goldman’s code, the geek goes to jail.

I do still like to look back on this bit of 8 track technology and watch Lloyd Blankfein mess with those reams of paper that Congress gave him to look at during testimony time, do you think he looks at his information and data this way, hell no.

I’m strictly talking here about how intelligent minds who can grab all the money and pass go function and we are a far cry from it, so how do folks make laws when hanging out with 8 track tapes?  Do you have an answer?  BD

The U.S. Government Accountability Office estimates federal government IT spending for fiscal year 2011 will be $79 billion, as outlined by GAO Director of Information Technology Management Issues David A. Powner in testimony before the U.S. House of Representatives Subcommittee on Financial Services and General Government held March 17.

GAO: How the Federal Government Plans to Spend $79 Billion in IT Investments in 2011 | FedScoop