Reading this article makes you stop and think about the healing processes in New Orleans and how long some of this takes.  In January of 2010 they were still working to get funding to rebuild Charity Hospital too, which is not related to this settlement, but another needed hospital in the New Orleans area. 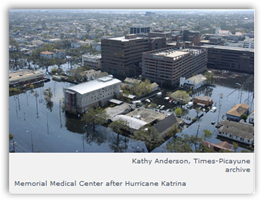 According to this article the terms and dollar amounts have not been revealed, but the hospital had a higher death rate of patients than the rest in the area.  Tenet has since then sold the hospital in 2006.  Tenet has settled 11 lawsuits that were related to Hurricane Katrina.  The settlement means this will not have to go to trial.  BD

Tenet Healthcare Corp. and attorneys for people who stayed at Memorial Medical Center in the traumatic days after Hurricane Katrina agreed to settle a class-action lawsuit against the company on Wednesday, both sides announced.

The lawsuit accused Tenet of failing to properly prepare for the storm. Memorial, located on Napoleon Avenue near its intersection with South Claiborne Avenue, was swamped by floodwaters after levees broke following the hurricane. The hospital lost power, including backup generators, and temperatures inside the facilities soared, a factor that contributed to the deaths of some patients.

The plaintiffs accused Tenet of neglecting to anticipate and prepare for the loss of power after the storm, as well as failing to develop and follow proper evacuation plans and take other necessary emergency-preparedness steps.

After Katrina, 45 bodies were recovered from Memorial, the highest number of any hospital in the city. Deaths at the facility soon became a focus of an investigation by Attorney General Charles Foti, who accused a doctor and two nurses of euthanatizing some of the sickest patients; the three were arrested in the summer of 2006. That case was rejected by a state grand jury in 2007.