The 10,000 chemicals to be tested will include chemicals in industrial and consumer

products as well as food additives and drugs.  So far 2500 chemicals for potential toxicity have been screened.  The FDA of course is right in here participating as with drugs this is one of their top priorities, to be able to predict unfavorable outcomes perhaps before a drug is approved and in circulation.  This can stand to add valuable information to drugs in the clinical trial stages as well.

You can watch the robot in action at the link here, done in Quick Time.  Below is a time released video showing how the robot was set up.  The evaluation process can take from one to five days and Pfizer is right up there ready to give it a try and again I would think all pharma companies would want to be on this band wagon as soon as possible.  A little less than a year ago the FDA announced their partnership with the NIH on the project.  Tox21 began initially as a joint project of the NIH and EPA.  One benefit too is that fewer animals will have to be used for looking for toxicity as what has been the main practice up until today.  BD 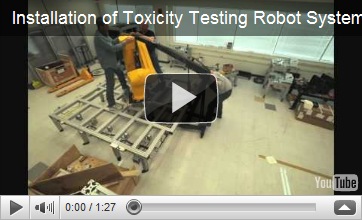 March 11, 2011, WASHINGTON (Coal Geology) – Several federal agencies have unveiled a new high-speed robot screening system that will test 10,000 different chemicals for potential toxicity. The system marks the beginning of a new phase of an ongoing collaboration, referred to as Tox21, that is working to protect people’s health by improving how chemicals are tested in this country.

The robot system, which is located at the National Institutes of Health

Chemical Genomics Center (NCGC), was purchased as part of the Tox21 collaboration established in 2008 between the U.S. Environmental Protection Agency (EPA), the National Institute of Environmental Health Sciences National Toxicology Program, and NCGC, with the addition of the U.S. Food and Drug Administration (FDA) in 2010. Tox21 merges existing resources – research, funding and testing tools – to develop ways to more effectively predict how chemicals will affect human health and the environment.