So far there have been 3 cases giving awards for the physical problems caused by Accutane.  In the US it’s pretty difficult to get a prescription today with several stipulations on the use based on the Ulcerative Colitis cases that have evolved.  Actor James Marshall is one of several cases being heard and Martin Sheen testified via video in this recent case.  Accutane is still available under generic drug names and is a cancer drug as well as being used for severe skin conditions. 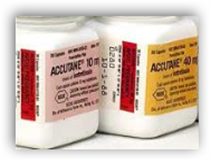 The US program for prescribing is called IPLEDGE which began in 2006.  Wikipedia has a full summary on how it works.  For those who suffer from severe acne the drug has been used for treatment and even on the internet it can be bought from companies over seas where a prescription is not necessary.  The actor here though had some major reactions according to the court case with extreme colitis created by the drug and had to even have surgery is says now he’s a prisoner in his own home due to the condition he has.  Any doctor in the US prescribing has to register with the FDA and there’s only a 7 day window for the patient to pick it up.

Toxicity is noted with higher dosages.  Again, read at Wikipedia for more information on the side effects.  Crohn’s disease and depression are among those listed.  I hope the case turns out well as the actor is asking for $11 million in damages.  BD

Sheen testified by video from California to jurors weighing claims by Marshall, 44, who played Louden Downey, a U.S. Marine in the 1992 movie “A Few Good Men.” Sheen, a star of the movie “Apocalypse Now” and the NBC drama “The West Wing,” said Marshall showed great promise before emergency surgery in 1995 to have his colon removed.

“He was projected as a pretty serious movie star,” Sheen, 70, told jurors yesterday in state court in Atlantic City, New Jersey. “He had a very unique talent that permitted him to go to that place where all artists try to go, that extremely personal place.”

Sheen said that Marshall changed when his ulcerative colitis followed his movie successes.

“There was a very dramatic change in his physicality,” Sheen said. “He was extremely thin. There was a marked difference in his personality. He was not as gregarious or fun- loving or as social as I remembered him. He was withdrawn in a lot of ways.”

Bolton asked if it hurt his career.

“Absolutely,” the actor replied. “There’s no question about that.”

Accutane is made by Roche unit Hoffmann-LaRoche Inc. of Nutley, New Jersey.

The case combining the three ex-Accutane users’ claims is the eighth to go to trial since juries began weighing allegations against the drug. Juries in New Jersey and Florida have ordered Roche to pay at least $45 million in damages.