mouth and I guess the snake didn’t care for that.  At any rate, you can watch the snake bite and later it died so does this say something about silicone breast implants being a bit toxic?  The language on the tape is Spanish but you can see what’s going on, wild video.

This looks like some kind of publicity event with the the model holding the snake and it crawling all over her but I could bet this might be the last stunt like this.  BD 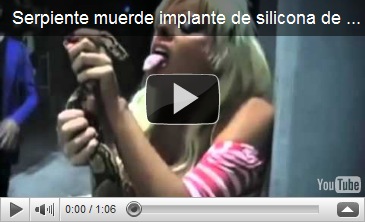 A snake that took a bite out of a model's breast on live television died of silicone poisoning shortly after.

Israeli model Orit Fox was handling the reptile while shooting a segment on Spanish TV's Telecino. After Fox kissed it on the mouth, the snake latched onto her left breast.

The snake's handlers quickly went to Fox's aid, removing the snake from the stunned model.

Fox was treated at a nearby hospital where she reportedly received a tetanus shot. She is said to be doing OK.