This story fits in with the series I have been posting about hospitals in need of financial assistance.  Lucky thus far for this community, the issues passed and the hospitals will stay open, but for how long and hope there is enough in the till to keep them open.  Read the full story at the links provided from this surgeon in Arkansas.  Rural hospitals are not the only ones with financial issues, there have been many in urban areas, facing the same challenges.  Other countries are having some similar issues as in Australia earlier this year, an airport was sold to build a new hospital. 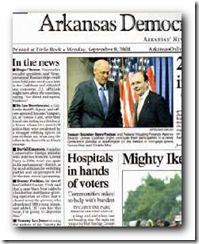 Access and availability to healthcare is certainly being stressed to the point of having enough money all over the US and in other global locations.  Affiliations with larger medical institutions are providing answers in some areas, and there's money going overseas with Venture Capitalists wanting a return on their investments as well.  BD

This is one of the headlines on the front of my local news. The article can't be read there without a  subscription, but can be read here in full as it was reprinted on the AARP website. Statewide, at least 11 small community hospitals receive some community support, typically in the form of sales taxes or millages, said Paul Cunningham, senior vice president for the Arkansas Hospital Association. Most of them have had local taxes approved within the last five or six years.

“The loss of health care to the community would be devastating,” she said. “I think a lot of people in the town would move. I would leave. I would move out of Malvern.”

Suture for a Living: Hospitals in Hands of Voters