This is pretty scary and when you look at the fact that the town can still fund pro football and high salaries there.  The state has already been selling State Buildings 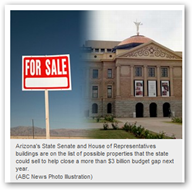 to help bring in additional revenue.  In my very early years I worked for the State of Arizona for around 6 years and this is sad to see.  That building in the picture is where I worked and I still the window where my office was.

Arizona May Sell Government Buildings Including the State House, Senate, and a Hospital

Speaking of football,  the Cardinals taking over the concessions at the stadium as Arizona Sports and Tourism Authority is strapped for cash and are relying on the team to help bring more events to the stadium which has also hosted a Super Bowl in the past.

As mentioned here, Federal funds are at stake for a loss as well if states are required to maintain eligibility levels for both programs, and part of that problem goes back to an infrastructure that needs to be modernized and updated to be able to report.  In that area, Arizona is not alone.

I think healthcare reform creates a substantial answer beyond the “cookie” cutting we have been experiencing for the last number of years as this is not going to work.   There are still a number of private industries “cutting a fat hog” in healthcare out there and everyone is in this together with making less and doing more.  This is John McCain’s state here that is allowing the children to be cut and left out.  BD

Arizona on Thursday became the first state to eliminate its Children’s Health Insurance Program when Gov. Jan Brewer signed an austere budget that will leave nearly 47,000 low-income children without coverage.

The Arizona budget is a vivid reflection of how the fiscal crisis afflicting state governments is cutting deeply into health care. The state also will roll back Medicaid coverage for childless adults in a move that is expected to eventually drop 310,000 people from the rolls.

The cuts also mean the state will forgo hundreds of millions of dollars in federal matching aid, and could lose far more if Congress passes a health bill that requires states to maintain eligibility levels for the two programs.

Three states, including Arizona, had in the last year capped enrollment in the Children’s Health Insurance Program, financed jointly by states and the federal government. But two of those states — California and Tennessee — quickly removed their caps, said Jocelyn Guyer, co-executive director of the Center for Children and Families at Georgetown University.