The title here brings about a good question, who understands “Meaningful Use”?  300 did, but what about the rest who took time to comment and send 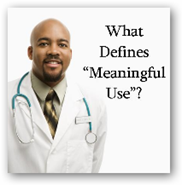 suggestions?  From reading the comments made here this tends to show that around 12-13% of those who responded understood or somewhat understood the goals here, and changing paradigms and technology could have also added to this fact as well.

Meaningful Use We Have the Name But Now for Some Standards? Let’s try Meaningful Algorithms Instead

Who really understands meaningful use I might guess is the big question and who was better in the know, doctors, vendors?  I still contend the area that is being overlooked to a degree are the biometric devices that report data, what devices and their use are meaningful?  We have problems with just using cell phones for calls and texting so how is this going to evolve.   The article stated so far that only half of the overall letters have been read.

WASHINGTON – The comment period on the proposed meaningful use rule and the interim standards final rule closed Monday. On Wednesday, federal officials said they had so far collected some 2,700 comment letters.

Steve Posnack, a policy analyst with the Office of the National Coordinator for Health Information Technology said ONC received 700 comment letters on the standards interim rule. After reviewing them, ONC found that only 300 of them were "relevant," Posnack said Wednesday at a meeting of the HIT Policy Committee.

Feds received 2,700 comment letters on meaningful use and standards rules | Healthcare IT News