The NHIN network is a “private”’ government network and there has been talk about someday allowing more available use for the public as well.

The Open Source “Connect” community portal also has a plug in that can be used to transport the data via the National Health Information Network .  You can also read more about the prototype being developed for web based software to populate EHR/EMR records with CMS reporting formats.  BD

Today, the California Health and Human Services convened a summit with an expected three hundred people in the interest of a state HIE (Health Information Exchange). This project has been tasked by volunteers and state groups and led by Jonah Frolich, deputy secretary of California Health and Human Services. The teams formed have met a series of hurdles already in preparation for the next big phase of executing the next generation system and raising an initial seed of $38.8m to move the effort forward. 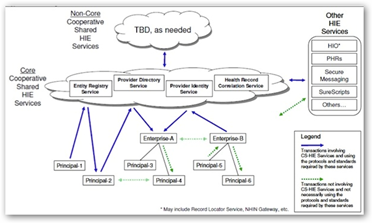 At stake is at least $3 billion by connecting to these services for doctors and hospitals that qualify by using the HIE as built. This means that doctors can bill for more Medi-Cal and Medicare payments that are expected to be available in coming years from the American Recovery and Reinvestment Act funds while using HIE services. Additionally, the services being created will need to support applications that engage consumers as they play a role. 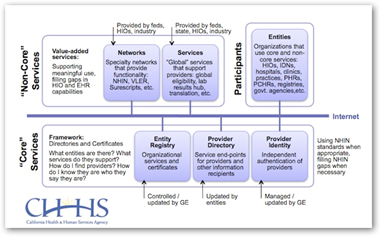 Last week, Governor Arnold Schwarzenegger and California Health and Human Services Agency Secretary Kim Belshé named a new nonprofit entity called Cal eConnect to oversee the development of Health Information Exchange services. One of the first tasks at hand is to finish the CA HIE Operational plan and to finalize details in budget, technical, and engagement plans to execute with the recent first grant by ONC for $38.8m.