If you didn’t know better, you might guess there’s something else going on in the picture here.  This system is more expensive than one that use finger tip scanning, but they were luck with a grant and were able to put the system into operation.

As is mentioned, biometric check in systems are not normally seen in regular clinic, but rather the more upscale types of medical offices.  The system also helps prevent fraud and omits duplicate files being created.  The file is always matched with the correct patient.  The clinic has over 37,000 patients on file and many speak little or broken English too, so this expedites that area as well.  In the article, it stated they have over 100 Jose Rodriguez patient on file, a common name but they all have different irises.  BD 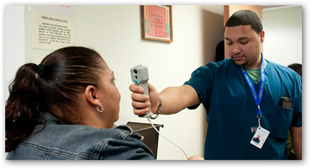 Checking Fernandez in, a clinic employee scans his eyes using a handheld camera. Within seconds, the camera reads his iris patterns, and a computer locates his medical record.

Such iris identification technology is usually seen in international airports to allow registered passengers to fast-track through passport checks and immigration.

But far from the sleek European airports, the South Bronx clinic that receives federal funding and operates in one of the most impoverished U.S. areas uses the instruments to prevent medical record mishaps.

Using a New York Department of Health grant, Urban Health Plan purchased the newer iris scanners in 2008 and fully integrated it the next year.

So far, patients have been very receptive to the scanner. Rarely does anyone decline having a picture taken of his or her eyes, De Leon said.

At Bronx clinic, the eyes are windows to medical records - CNN.com