This takes me back to memories of my days in logistics and working with Pfizer who was one of my accounts.  You can almost bet the products are on their way out

of the country as I write.  I dealt with some of this years ago and yes the thefts are planned.  One time I had an account of mine, D-Link had 5 pallets stolen from the truck while en route, when the truck was not watched for around 2 minutes, they work fast.

The big haul here was anti-depressants so you know who’s drugs may be going up in price now, due to supply and demand here.   It’s too bad they were not using some type of bar coding method to identify the stolen drugs though.  Here’s a post I wrote about “tagging” medical devices and it could be used for pharmaceuticals too.  Granted the drugs could be repackaged, but that also takes time and labor on their part, so again without a sophisticated tracking system, here we are once again. When I made this post I immediately heard from a pharmacists stating that this would be great for drugs too!

Watch this video and pretend that magazine tag is on a drug bottle, you get the picture.  The FDA could certainly use this and the link above is quite lengthy and has a mainstay on my site and hopefully some folks will crawl out of “tech denial” and take notice.  Amazing General Mills has started putting them on food products and yet with high priced pharmaceutical products and medical devices we just can’t seem to get anywhere.  These can be encrypted and work with RFID too.  Perhaps after this heist maybe some attention may be called to the matter with Tags.  Almost any cell phone with a camera will do the job.  BD 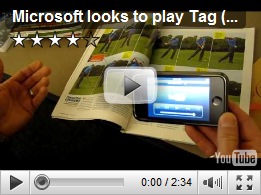 HARTFORD, Conn. (AP) -- In a Hollywood-style heist, thieves cut a hole in the roof of a warehouse, rappelled inside and scored one of the biggest hauls of its kind -- not diamonds, gold bullion or Old World art, but about $75 million in antidepressants and other prescription drugs.

The pills -- stolen from the pharmaceutical giant Eli Lilly & Co. in quantities big enough to fill a tractor-trailer -- are believed to be destined for the black market, perhaps overseas.

''This is like the Brink's pill heist,'' said Erik Gordon, a University of Michigan business professor who studies the health care industry. ''This one will enter the folklore.''

The thieves apparently scaled the brick exterior of the warehouse in an industrial park in Enfield, a town about midway between Hartford and Springfield, Mass., during a blustery rainstorm before daybreak Sunday. After lowering themselves to the floor, they disabled the alarms and spent at least an hour loading pallets of drugs into a vehicle at the loading dock, authorities said.

Edward Sagebiel, a spokesman for Indianapolis-based Eli Lilly, put the wholesale value of the drugs at $75 million and said they included the antidepressants Prozac and Cymbalta and the anti-psychotic Zyprexa. No narcotics or other painkillers were in the warehouse, he said.