We hear a lot about Medicare fraud and how much is fraudulently billed.  I talk a lot about technology being an answer but in this case where the criminals are outdoing the doctors and hospitals in coding and doing a better job with filling out forms, the Medicare slot machine is paying off pretty big.

In the video below the individuals purchased a pharmacy operation that already had a Medicare license and went to work, billing, billing and more billing.  If we could take the criminals that code for fraud and turn these folks into legitimate employees we might have something here.  All claims are processed electronically so the ones who get the data filled in properly and the right boxes checked, get the payout, legally or illegally.

For 2 months, they had “midnight” billing going on.  If you do your paperwork correctly, you get paid.  Meanwhile back at the ranch, hospitals and doctors struggle to keep up, but unlike the criminals they are taking care of patients, the criminals do not and are only billing so thus they focus on billing to get the pay out.  Click on the image below to watch the Nightline story. 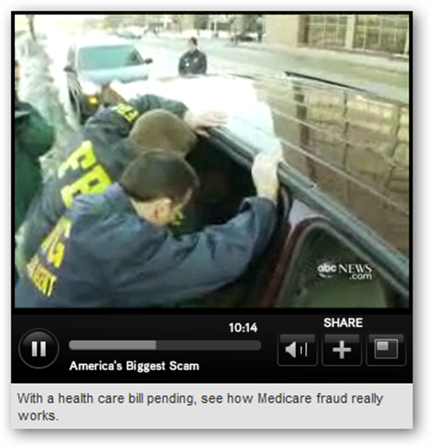 The video also points out how frustrating it can be to get Medicare to investigate as well.   In addition, 60 Minutes had a video talking to an individual who actually did all of this.

Criminals last year also found a way to use the NPI numbers of “dead doctors” to generate revenue.  Again, this type of fraud should be monitored and checked out and as you can see by the example here, it takes more than technology sometimes to find fraud as filling out the forms and checking the right boxes can be done by criminals very well when nobody is home watching the shop.

What it interesting is watching the FBI policing agents to visit an actual pharmacy that had not filled a prescription at all, they just billed.

In the example in the video, a quick million was billed in 2 months.  The people covered by Medicare have no clue either.  For $45,000 the existing business was purchased by the criminals along with the existing patient files and data bases.

A four month "Nightline" investigation into Medicare fraud makes one thing perfectly clear: this is a crime that pays and pays and pays. The federal government admits that a staggering $60 billion is stolen from tax payers through Medicare scams every year. Some experts believe the number is more than twice that.

It looks to be what the agents say is a typical scam: a fraudster buys a pharmacy along with its Medicare license and entire patient database. This one was sold five months ago for just $45,000.

The scheme is relatively low-risk and requires little investment. Investigators allege that one person at a computer terminal could have submitted the million dollars worth of claims this pharmacy sent to Medicare in two months, before shuttering the place and disappearing.

Ogrosky said criminals' forms are often filled out more completely than actual health care providers'.  "Real hospitals and doctors who are struggling every day to keep up with the paperwork sometimes miss things ...whereas if you are a criminal trying to steal, all the forms look perfect every time because the whole goal of the enterprise is to check the right boxes," he said.

Judge Marshall Ader, who sat on the Florida state bench for decades, said he even had trouble getting Medicare to pay attention. When he saw that Medicare was being billed for two prosthetic legs using his Medicare number -- for the record he has both of his legs -- he hit the roof.

According to Piper, Medicare was billed three times a week at this clinic and paid out $10,000 per claim -- more than $30,000 a week for a service that was never provided.