Earlier this week I participated on a blog talk radio show discussing this exact matter and interesting that this case makes the news this week.  As I keep saying it’s

all about the algorithms.  If you don’t come to admit they exist and determine coverage and treatment, you’re missing the boat and the real mechanics of how all this takes place with health insurance.   If you have an hour, you can listen to the archive.  This is exactly what I talked about “false positives” being generated with the use of computer “algorithms”.   They are “looking for fraud” supposedly, but where do you draw the line when in the course of such action one discovers other consumers they could shut off in order to avoid paying expensive claims?  It happens all the time.

Payment and compensation all revolved around the numbers and there’s a lot of gray in some of these areas too as we don’t have sufficient laws to cover a lot of this since we are fighting the battle with swords and the health insurers for the most part with their high investments with technology and business intelligence systems have machine guns.

When you read further in here the CEO justified the rescission process being necessary to hold down the cost of premiums, wait a minute, hold down, we don’t see that today.  This testimony was just done by the CEO of the health insurance company in June of 2009.  He also went on to say that those who had been cut off had omitted information and/or were not truthful with what was provided and those “bad” patients who needed care were at fault.  Nice guy, right?

By the way, this patient in 2001 was 17 years old and did what he was supposed to do, went out and bought insurance, the big market today that insurers are looking for with our youth finding it not something they want to spend money on.  On top of all of this, the insurance company audit trail showed records of deleted phone calls and other pertinent items.  So basically, once it showed he had HIV, it’s was a “fraud” case investigation.  I didn’t know that contracting HIV was fraud and see 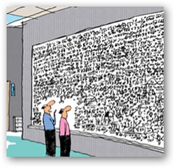 it as a huge misfortune and an individual who needs care.

What is also strange in this entire story too is that the CEO testified that Congress should pass a law that would prevent this type of rescission activity.  With this one comment alone, I say another useless CEO that wants to just take home a big fat paycheck.  I guess they need laws and lack human morals here to make the right decisions it appears.  This just goes to show how powerful those decision making “algorithms” really are – nobody will go against what is shown on the screen when presented.  To this I say we need a Department of Algorithms so we know up front how they are going to analyze all of this, we do it for electronic medical records to make sure they function properly.

Here’s a case of fraud “algorithms” in San Diego which I understand is still tied up in court and it pitting patients against doctors, and vice versa.

It’s no wonder that Virginia and Idaho are revolting about forcing citizens to have health insurance from companies who do business like this, and they all do it.  California and Blue Cross was all over the news not too long ago in regards to rescission.

When you go back to re-enroll, which is what happened to me, I had to prove that I had not seen a doctor for 6 months and pay a 25% premium, now is that the preventive healthcare they talk about – NOT.  The movie “Sicko” brought all of this to our attention, but needs a sequel on how to “fight the algorithms” and get consumers some new items to do battle with besides the swords.

Here’s what can happen with the MIB records below.  One may never get items correct either that prevent individuals from securing health insurance.

Remember all those old 10-20 claim files are around and available to insurance companies through sites like the MIB (medical insurance bureau) and if they can use that information to rescind, they probably will.  On the other hand we have this big gaping hole with Medicare that all the crooks dip into so the infrastructure and enforcement efforts definitely need to be equal and and improved.  The post below adds some information on how to fight denied claims and coverage.

After we get through with all of this on the other side of the coin we have hospitals telling doctors they are not meeting quotas, in other words there are not enough people being admitted so they can meet their costs.  Here’s a video on what happened in Texas with a contracted ER group of doctors. 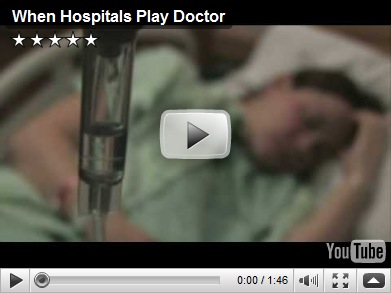 In short, this is the mechanics of how the system operates today.  If you take time to check out the links there’s even more information revealed here.  I’m trying to just put this out in plain English with facts all brought together here on what really goes on behind the scenes and how you are viewed in the eyes of the algorithms that do the computations that are read by humans for profitable decision making processes, not necessarily better care and these are the current rules that patients, doctors and hospitals have been dealt.

This is truly a sad legal story here, but it is the truth on how greed corrupts healthcare and if you become ill, it is viewed as all “your” fault.  BD

(Reuters) - In May, 2002, Jerome Mitchell, a 17-year old college freshman from rural South Carolina, learned he had contracted HIV. The news, of course, was devastating, but Mitchell believed that he had one thing going for him: On his own initiative, in anticipation of his first year in college, he had purchased his own health insurance.

Shortly after his diagnosis, however, his insurance company, Fortis, revoked his policy. Mitchell was told that without further treatment his HIV would become full-blown AIDS within a year or two and he would most likely die within two years after that.

So he hired an attorney -- not because he wanted to sue anyone; on the contrary, the shy African-American teenager expected his insurance was canceled by mistake and would be reinstated once he set the company straight.

But Fortis, now known as Assurant Health, ignored his attorney's letters, as they had earlier inquiries from a case worker at a local clinic who was helping him. So Mitchell sued.

Previously undisclosed records from Mitchell's case reveal that Fortis had a company policy of targeting policyholders with HIV. A computer program and algorithm targeted every policyholder recently diagnosed with HIV for an automatic fraud investigation, as the company searched for any pretext to revoke their policy. As was the case with Mitchell, their insurance policies often were canceled on erroneous information, the flimsiest of evidence, or for no good reason at all, according to the court documents and interviews with state and federal investigators.

Much of the trial record of the Mitchell case is bound by a confidentiality order and not available to the public. But two orders written by the presiding judge, Michael G. Nettles, a state circuit judge for the 12th Judicial District of South Carolina, of Florence County, describe the case in detail. Judge Nettles wrote the orders in response to motions by Assurant that the jury's verdict be set aside or reduced.

In the motions, Nettles not only strongly denied Fortis' claims but condemned the corporation's conduct.

"There was evidence that Fortis' general counsel insisted years ago that members of the rescission committee not record the identity of the persons present and involved in the process of making a decision to rescind a Fortis health insurance policy," Nettles wrote.

Elsewhere in his order, Nettles noted that there were no "minutes of actions, votes, or any business conducted during the rescission committee's meeting."

"In addition to these acts toward (Mitchell) there was evidence that Fortis has for some time been making recommendations for rescission, and acting on those recommendations, without good-faith investigation conducted fairly and objectively ... Fortis pre-programmed its computer to recognize the billing codes for expensive health conditions, which triggers an automatic fraud investigation by its "Cost Containment" division whenever such a code is recognized."