Home » My Commentaries » Other Items of Interest » Pharma/FDA News » Tapping the Brain for Profit - Medical Devices for the Brain, they do exist

Neuromodulation is the term used relative to medical device implants for the brain.  Intractable epilepsy and intractable depression are 2 problems the device can be used to treat, although this is massive intrusive surgery and a step to really think about.  Some insurance 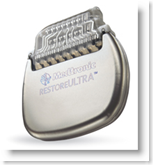 companies do pay for some of this.  Some with Parkinson's' disease have been helped.  One thing to keep in mind, a drug is a visitor that leave the body at some point in time, where as a medical device comes to live with you.

Unlike heart surgery, an neuro implant impacts the very core of how we function, the brain.  We are all familiar with devices for the heart but this appears to be a new moving frontier with medical devices, one that no doubt will have a lot of controversy as the technology evolves.  More information is available at the web site.  The batteries do need to be recharged as well.  BD

Persuading people lots of people to have holes drilled into their skulls and electrode-tipped wires connected to their brains might seem like a puzzling corporate strategy. But when it comes from a company that's already induced hundreds of thousands of people to attach silver-dollar-size devices to their hearts, it just might work.

Medtronic: Tapping the Brain for Profit - US News and World Report