Back in October of 2008 I made this post:  The 2 New Hot Words in Healthcare: Algorithms and Whistleblowers and it still holds true!  By running image results and comparing them to 15 million images to find cases of patients who have been diagnosed with the same/similar imaging results, this is allowing for aneurysms to be detected sooner.  This is not new in healthcare, but the availability of having a large data base to work with is.  This also expands the ability of researchers to examine the images and help with algorithmic diagnosing information to be added. 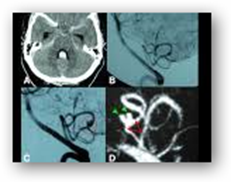 Once all of this is done, the patients can have the ability to store the images in their HealthVault PHR, to share with another doctor or hospital.

Aneurysms are sometimes hidden and hard to find and with the additional information, hopefully this will allow for earlier detection and saving lives of those who are walking around with an unknown potential killer in their system.  I learned a bit about how aneurysms with my interview with Dr. Bart Muhs on the repair of aneurysms (not brain aneurysms) but one important item he mentioned is the fact that they are a potential silent killer as they are not detected usually until a patient is being seen for something else, and then through diagnostic testing it shows up with imaging.  BD

Collaboration between IBM and Mayo Clinic is aiding radiologists in detecting potentially deadly or paralyzing brain aneurysms in patients more quickly and accurately. The data and images collected will also be available via a private cloud for research into other brain ailments, as well as for patients to include the test information into their personal e-health records.

The new brain aneurysm detection system involves advanced imaging scans combined with analytics technology developed by Mayo and IBM. The analytics use computer algorithms to automatically turn what would normally be viewed by radiologists as 2-D images into slices of 3-D images that are analyzed for indications of widening blood vessels, said Bill Rapp, IBM chief technology officer of healthcare and life sciences and co-director of the IBM medical imaging informatics innovation center located at Mayo's Rochester, Minn. campus.

By using scanned images from hundreds of patients, the algorithms were "trained" to detect possible aneurysms, Rapp said. Those suspected

aneurysms are highlighted by a box that appears in the brain scan images, which are then investigated further by the radiologists, said Rapp.

Since launching the project last summer, the analytics has been used on 15 million images from thousands of patients, already helping to save lives, said Rapp. Mayo would not disclose estimates on how many deaths were prevented using the technology so far.

Also, that cloud infrastructure allows Mayo to provide patients with their radiological images and reports so that patients can add the information to e-personal health records on Web-based platforms such as Google and Microsoft HealthVault, said Rapp.