Israel was first on the scene with the first operating room.  A few months ago I attended the World Tourism Convention and spent some time speaking with healthcare representatives from Israel, and one word I came away with was “impressive”.  Nice for Israel to be there lending a helping hand.

Medecins San Frontieres has been conducting surgeries and has been delayed in having everything together as part of their mobile hospital was directed to the airport in the Dominican Republic and is being trucked in from there.  This is a group of about 3 different articles.    The US Navy has 2 ships in route as well.  So far I have read where the US has donated over 100 million, says a lot as we are saturated in healthcare reform ourselves with record numbers of unemployed.  BD 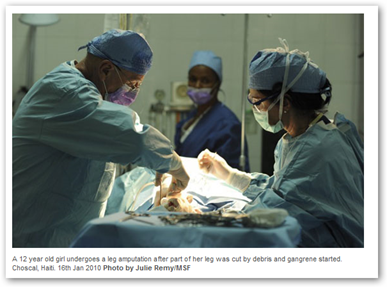 12:00PM EST: Port-au-Prince, Haiti – The only operating room (O.R.) in earthquake-ravaged Haiti is that of the Israeli Field Hospital.

YWN has spoken to the IDF Field Hospital Deputy Commander Danny Moshayov on the ground in Haiti just a few moments ago, along with veteran Hatzolah Paramedics Shlomo Zakheim & Eli Rowe — who described the scene in great detail.

Although many many government’s across the globe have sent search & rescue teams, aid, and funds to the area, what is most notable is the fact that Israel came from halfway across the globe and was from the first countries to establish a fully functioning hospital.

“Our hospital has the only functioning O.R. in Haiti currently, and we have treated well over 100 people since we started,” Moshayov told YWN.

German Red Cross "mini-hospital" on its way to Haiti

Berlin - A 'mini-hospital' provided by the German Red Cross was on its way by air to Haiti Saturday, with the beds, equipment and seven tents to house them all packed inside 200 crates.

The aircraft which took off from Berlin was also carrying three four-wheel-drive vehicles, a doctor and a team of Red Cross nurses.

In the newly working hospital in the Carrefour district, the MSF surgical team carried out 90 operations within 24 hours of getting the theatre usable. And that was only two hours after they found the hospital. The surgical team at Choscal hospital also completed around 90 operations so far. Another team is working from a container and carried out twenty. More capacity is on its way, but the twin theatre inflatable hospital has been delayed because one of the planes it was on did not get permission to land at Port au Prince airport and was re-routed to the Dominican Republic. The other half of the hospital did arrive today but MSF is still concerned that vital supplies are being held up.