Yesterday Pau Levy at Beth Israel was somewhat confused why the rescue efforts of Israel has not been seen in the press, well I found some today and you can watch the video and listen.  He runs a hospital so he knows about being prepared.  Dr. Jennifer Murin who is there in Haiti from Harvard Medical tells the story and she is very frustrated.  The hospital from Israel is set up with ventilators and imaging right in the hospital, none of the other centers have this.  A couple days ago I had posted about portable hospitals set up and Israel was at the top of the list.

The Doctor says “desperate” is the word here.  Dr. Murin has been there since Thursday and states nobody but the Israeli hospital is taking patients in for surgery.  She states now that the survivors from the quake are now facing death due to their bodies beginning to rot, they need surgery.

The reporter herself says she is amazed as this is a different world compared to what is going on in other areas.  Israel came prepared and is taking care of patients and I understand the frustration now in why some of this was passed over for a few days by the press as some fortunate survivors are getting care.  BD 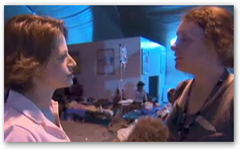