It was fully verified by scientists and the local news agency in Virginia took it to the Smithsonian.  It came through the roof and the firewall and pushed ceiling tile 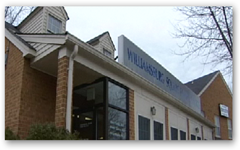 into the carpet and into the floor; lucky neither doctor nor patient were in the exam room when it came barreling in.  This was the 4th recorded meteorite to fall in Virginia.

It moved at 223 miles per hours and it weighs just over a half a pound, not big at all, but one heck of a lot power when arrived.

There are 2 videos that tell the story with the second video about the meteorite hunters who are looking for additional remnants.

This also is going to be on the Science Channel and it is very rare that one actually hits earth, so they are looking for more pieces that could have also hit.

Nothing like a meteor hit to drum up a little business for the practice.  BD

The doctor was not hit, which is not unheard of, but had the timing been slightly different he could have been. The half pound rock was estimated as traveling around 220 mph when it hit the office and could have easily have cause serious injury if not death had it hit him.