This is very cool and like every healthcare blogger I immediately start thinking about medical images viewed up there.  Of course there are many other functions that

the computer could lend itself too.  Hospitals are also beginning to use Surface from Microsoft with taking advantage of touch screen capabilities.   This technology is combining cameras with touch screen so no real touch, just point.

With more hospitals working with Twitter and other social networks this could be a valuable tool and anyone could read the updates from the home page of the hospital.

“All in all, your just another tweet in the wall”

Of course beyond social networks and imaging, the wall could be an instant and easily accessible source to locate information, and let’s face it, the older we get, the bigger screen we like.  Who knows, will we all have one of these in our house someday?  The video states that we are a year off from having one of these available at the consumer level though.  BD

About a year ago, HP began working on a ginormous touchscreen display for their PR firm’s Manhattan offices. The resulting product, called the Wall of Touch, was such a hit that it has found its way into the workplaces of other select clients, with more on the way. Ironically, despite its name, one of the things that makes the Wall unique is that users don’t have to actually touch it. 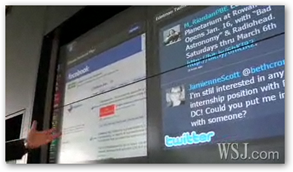 It won’t come cheap, though. Prices are expected to range from $US2,000 up to $100,000 for systems with features such as HD video conferencing.

So will a Touchless Touchscreen be arriving at a location near you soon? “We’re in the process of building out the next handful of walls as part of supporting our customer base, with the intent that, if there’s enough interest, HP will turn it into a mainstream product,” HP’s Personal Systems Group VP Philip McKinney told the Wall Street Journal.