I don’t know if you watched the State of the Union address last night, but here’s my take on why she may have been embarrassed.  If you watched the various cameras were panning the entire room during the entire speech by the President.  Obesity with children is a big problem and kudos to Michelle Obama for taking on 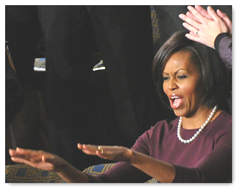 Now why was this maybe an embarrassment?  Going back to the cameras panning the audience, there were enough overweight and semi obese people listening to the President in the House to fill up a clinical trial on weight reduction and battling obesity!

Ok, so are we examples for the children or are we exempt and allowed to pack on the pounds and tell them not to do that.   As we get older, we all have more trouble taking them off, self included.  So I offer this as my simple explanation on why the embarrassment, when you have a whole room with many over weight and obese, and you are being acknowledged for beginning a program to help children and you look at your surroundings, maybe not much more needs to be said.

If you read between the lines we have a large group of non participants that are creating laws and supposed to be working in the best interest of the the American public and with the focus on reducing obesity, sitting on a “fat” bottom kind of takes away from being any kind of role model, anyway my 2 cents on this topic. (grin).  BD

First Lady Michelle Obama received some applause of her own during last night's State of the Union — not for her dress, not for her hair (which, by the way, were both fabulous), but for her efforts to curb childhood obesity in one of the fattest countries on Earth.

As President Obama discussed his plans for health insurance, he paused to acknowledge the First Lady's agenda, gesturing to her and saying:

"I want to acknowledge our First Lady, Michelle Obama, who this year is creating a national movement to tackle the epidemic of childhood obesity and make our kids healthier. Thank you."

As the crowd rose to its feet for a standing ovation, Ms. Obama looked nonplussed. Remaining seated, she gestured with both hands and mouthed, "sit down."