The SRI was founded 1946 as part of Stanford University.  This is fascinating place

to work I would guess.  Robert Scoble recently took a tour and provided videos that cover some of what they do there.  They have everything from contract with the FDA to figure out why devices (stents) and drugs don’t work all the way up to robotics.  I’m going to focus on the the healthcare end of things even though they have a lot more than healthcare going on.

robot) and Nuance listed.  This is where they had their beginnings at SRI.  SRI is also the birthplace of the “computer mouse”.  At the end of this post I have included the SRI documentary so you can see how it evolved over the years.  SRI has worked with the NIH to develop drugs and clinical trials since the 1950s.

“SRI Biosciences has all of the resources necessary to advance R&D programs from Idea to IND® — from initial discovery to investigational new drug applications that enable human clinical trials. We team with academia, biotech and pharma companies, foundations, and government agencies to solve important health problems around the globe. We carry out basic research, drug discovery, and drug development, including contract services. SRI's drug pipeline has yielded several marketed drugs, several additional drugs currently in human testing, and more than 10 programs in preclinical stages or early discovery. In our CRO business, we have advanced well over 100 drugs to clinical trials. We also work at the interfaces of science and technology to create novel platforms for the next generation of tools in diagnostics, drug delivery, medical devices, and systems biology.” 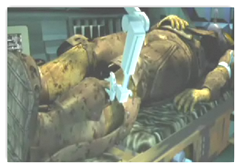 First of all I have included Robert’s interviews relative to the Intuitive Robotic Surgery Unit.  In the first video as he states you get an explanation and inside look into how the robot works today and then part 2 shows the future, robotic surgery over the web and with “no” doctor at the controls, yikes.  I don’t know if I would ever be ready for that one.  Some of their work is in conjunction with DARPA.  These take a while to watch so be prepared.  Robert even was able to sit down and try his hand at the daVinci.  The future of “surgical pods” for the military is something that is work in progress. 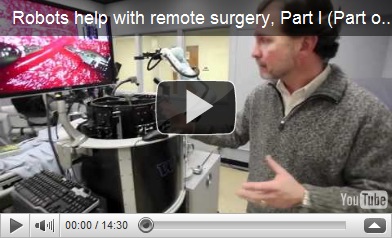 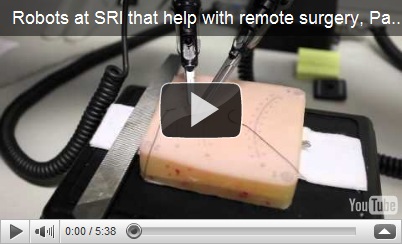 if you want to see more on the “trauma pod” SRI has an in depth video here which is using a “dummy’ and with no doctor present doing surgery.  In addition you can listen to a doctor speak about the robotics unit.  The animated video at the end shows a soldier injured, transferred to the pod and surgery is done and up he goes to the helicopter, almost spooky.

The third video here talks about how they work with various medical device companies trying to find out why “stents” fail, something we all want to know about!  We don’t want one of those by any means.  In addition there’s discussion of other industries too and how the “failure team” carries out their projects. 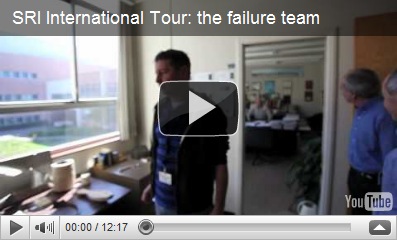 Now if you have some time, the last video is from the website which goes through the history of SRI.  SRI touts over 50,000 projects they have worked on and completed.  Most of this post involves really watching both Robert’s videos and the one included from the site to get the full impact and history of what goes on at SRI.

With all the recalls we have today, it’s good to see someone is on the job. If you

want to see more outside of the healthcare area, TechCrunch has a few more of Robert’s videos where he posted as a guest and they are all very interesting by all means, I watched all of them.  Anyway, automated surgery looks like it’s the way of the future and some parts I like and some I’m not so sure about yet.  BD

“This is a small part of an exclusive tour I had of SRI International, the innovative place that invented the mouse, among other things. Here we meet the team that studies failure of materials.”